He told me to really get the feel of the language. Don’t think of Greek just as a code for English; get into the Greek itself. I asked him about reading with a diglot, but he encouraged me to check the English translation only after reading an entire Greek paragraph, and then, only as necessary.

Zondervan has published what is to my knowledge the only “reader’s” edition of the Hebrew Bible. It’s a masterpiece. The font is clear, sized perfectly, and easy to read (see at right, and click to enlarge). It uses the Leningrad Codex. It has no textual apparatus (which could be a distraction in a “reader’s edition”), but instead footnotes rarely occurring vocabulary. Not counting proper nouns, editors Philip Brown and Bryan Smith footnote all words that occur less than 100 times in the Hebrew Bible. Here they give “glosses,” which give the reader the basic meaning of the word. Aramaic words that occur less than 25 times are listed in the footnotes in the page on which they occur.

For readers who blank on a word that occurs, say, 150 times in the Hebrew Bible, a glossary at the back will allow them to look up even additional words.

Brown used HALOT and BDB to write the glosses. The bottom of the page looks like this (click for larger):

Note in #s 2, 7, and 8 that there is also listed what the verb stem is for a given use. What makes this feature especially easy to use is the bolding of the words before their glosses.

The only thing to critique in the Hebrew reader’s edition is that proper nouns, which are to appear in grey font since they’re not footnoted, occasionally go missed. Brown has posted an errata list here, many of which have been fixed in recent printings.

For a preview of the Hebrew reader’s edition, see here (PDF) and here (PDF).

Zondervan’s Greek reader’s New Testament has not met with such universal acclaim. It’s a good resource to have on hand, to be sure, but in my view it’s not as well executed as the Hebrew reader’s Bible.

Rather than being based on the scholarly editions of the NA27 or UBS4, the text is “the eclectic text that underpins the Today’s New International Version.” The scholars who produced the TNIV, in other words, made different textual decisions in some instances than did the editors of the “Standard Text” of the NA27/UBS4. Where this is the case, a limited textual apparatus notes it. While this could be problematic for textual criticism, the text is not vastly different from the standard one, and is certainly fine for reading.

As with the Hebrew reader’s edition, the Greek reader’s Bible footnotes and explains words that occur less than 30 times in the Greek New Testament. One unfortunate decision is that, unlike the Hebrew, the Greek footnotes do not have the glossed word in bold. This makes navigating the footnotes more cumbersome:

Font is perhaps a personal preference. While Philip Brown did a magnificent job of typesetting the Hebrew, the Greek font leaves something to be desired. It’s not the easiest Greek font I’ve read. It’s not unreadable as fonts go, but it’s thin. I got used to it after a while, so it’s not unmanageable, but the font in the UBS Greek Reader’s New Testament is easier to read. The latter also puts the footnoted glosses into two columns, which makes referencing them quicker. 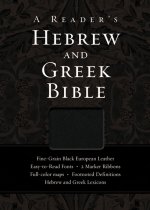 Not long ago Zondervan combined the Hebrew and the Greek into one mammoth, leather-bound Reader’s Hebrew and Greek Bible. The volume is large (but how could it not be?) and impressive. It’s constructed well. The binding is sewn (rejoice!), so it will last for a while.

This combination carries with it the great advantage that its user has both the Hebrew and the Greek Bibles under one cover. Now I just have to carry one geeky Bible to church rather than two! Huge benefit.

Another nice thing about this edition is that with Hebrew going from right to left and Greek from left to right, the Greek New Testament starts at the “front” and the Hebrew Bible starts at the “back,” just as both would be in their separate volumes.

The introduction to each half explains well how the text is laid out, the footnoting of the vocabulary, and so on. All the glory of Brown’s Hebrew edition is there, and the less-than-ideal Greek font is there in the Greek portion. One thing to add in appreciation of the Greek part, however, is that Old Testament quotations appear in bold, with their references listed at the bottom of the page. The eight pages of color maps between the two sections are a nice bonus, too.

The construction of the two Bibles combined is executed quite well. I’m happy to only have to take one original language Bible with me to church now.

Thanks to Zondervan for the review copy of A Reader’s Hebrew and Greek Bible. They provided me with one in the hopes of my reviewing it on my blog, but with no expectation as to the content of the review. Find Zondervan’s product page here.

16 thoughts on “N.T. Wright on learning Greek, and a review of A Reader’s Hebrew and Greek Bible by Zondervan”