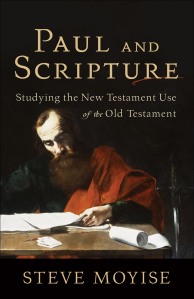 There are over 100 explicit quotations of Scripture in Paul’s letters and at least double that number of allusions. However, what is potentially more useful than just citing Paul’s answers to first-century questions is to study how Paul interpreted Scripture, and that is the theme of this book. (1)

This summer I reviewed the third volume of a de facto trilogy by Steve Moyise. In that same series is Paul and Scripture: Studying the New Testament Use of the Old Testament (click on book cover image to see at Amazon). In 160 packed pages Moyise surveys Paul’s use of the Hebrew Bible/Septuagint.

Moyise’s approach is a thematic one, rather than book-by-book. This helps the reader focus on how Paul treated the same topic across his various letters.

The author begins with an introduction to Paul, his “conversion” experience, his missionary activity, and a wonderful problematizing of the issue: because Paul was familiar with Greek, Hebrew, and Aramaic versions of Scripture, “[W]hen Paul introduces a phrase or sentence with an introductory formula (IF) such as ‘it is written’, we have to ask ourselves which version of the Scriptures he has in mind” (10). For Paul “would not have had our concept of ‘Bible’, a bound volume of 66 books (for Protestants) residing on his bookshelf” (10).

Moyise keeps his and the reader’s eye on this issue throughout Paul and Scripture. He explores how Paul used:

I don’t even mind that at the moment I’m a bit perplexed by how Paul could both praise the law as being from God yet also refer to it as a “the ministry that brought death.”

The final chapter is a more detailed survey dealing with “modern approaches to Paul’s use of Scripture,” which Moyise divides into “an intertextual approach,” “a narrative approach,” and “a rhetorical approach” (111 ff.).

As with The Later New Testament Writings and Scripture, the book is accessible to a non-scholar or non-specialist in this field, though it will require some work. Due to the book’s brevity, and what I assume was Moyise’s desire to still cover all the proper territory, the book is dense. This means that even a short volume like this will be a great reference to me for some time, as I seek to better understand the ways in which Paul used the Old Testament, and the ways in which Christians have tried to make sense of that use for some 2,000 years, especially recently.

The gray shaded boxes throughout explain key concepts such as the Septuagint, Origen’s Hexapla, Greek grammar, the Dead Sea Scrolls, and so on. As with Moyise’s other book, one does not need to know Greek or Hebrew to read Paul and Scripture, but he does not hesitate to use transliterated Greek to aid his explanation.

I have begun to appreciate Moyise’s even-handedness in presenting various viewpoints and interpretations. Even when discussing potentially controversial aspects of Paul (which books Paul authored, the “New Perspective,” or the idea of some that Paul actually exhibited “contradictory” and inconsistent views of the law), Moyise is fair and presents the various views in a way that the reader is left to consider them for herself or himself. (And the reader knows where to go to find more.)

One thing that seems rare in a work like this is that Moyise generally writes out a Scripture he is citing, rather than just placing a slew of references in parentheses for the reader to slowly work through. This latter method is not all bad, but Moyise’s quotation or summation of the references he cites makes for a smooth read.

I found helpful Moyise’s employment of “an eclectic view, using whatever methods or approaches were helpful for understanding the particular quotation” (111). Moyise doesn’t conclusively answer all the questions that arise when studying Paul’s use of Scripture, nor does he seek to. He hopes “that this book has both laid a foundation and stimulated an interest to go on and read further” (125), a mission he very much has accomplished (at least in this reader) with Paul and Scripture.

Thank you to Baker Academic for providing me with a review copy of the book. See its product page at Baker here.

One thought on “Paul and the Old Testament”