I wrote about the Psalms as descriptive and prescriptive not long ago:

The writers of the Psalms give language to the whole range of emotions: from gratitude to fear, from joy to lamentation, from petition to thanksgiving, from intimate, private prayers to national, corporate prayers. In this way they are eminently descriptive of the human experience.

The Psalms also prescriptively guide the reader into various postures of prayer, so that the one praying does not only ever approach God with petitions, or only ever with complaint, and so on. The cognitive and affective come together in the Psalms in sometimes unexpected ways. Psalms of lament, for example, often begin with a loud “Why?” (stressing the affective) yet end with a determined profession of faith like, “But I will trust in you still….” In this way they stress the use of cognitive powers in prayer—external life evidence notwithstanding!

The Psalms express (descriptively) and call forth (prescriptively) a whole spectrum of human experience in relationship to God. They teach us to bring our whole selves to God in worship.

There comes a point in biblical studies when one has to say, I guess we’ll never know. That’s especially true with possible musical settings of Israel’s Psalms (careful efforts notwithstanding). So when it comes to music today for the Psalms, the Church (and before that, the synagogue) has had to make the way by walking.

A few months ago I received an email from Adam Wright, a church worship leader in Alabama and primary force behind The Corner Room. He introduced me to his band’s Psalm Songs, Volume 1. I’ve heard Scripture set to music in ways that were helpful and edifying, as well as ways that were… well… not. I was getting ready to reply with what I usually need to say, which is that I’m behind on existing reviews and need to take a pass on writing about this record. But then I listened and found myself spending at least a half hour at his site. Months later the record is still on regular rotation at our house and during my sermon preparation sessions and in our car.

Each of the album’s ten tracks sets a Psalm to full-band music. Adam writes, “As the Psalms are diverse in their character and intent, so is the musical character of this collection – rock, folk, bluegrass and modern worship are genres you’ll hear on this first volume.” Not only that, the kinds of Psalms represented are wonderfully diverse. The album covers a broad range: from the Psalm of Ascent (121) to the pastoral Psalm (23) to the lament Psalm (42)–and that’s just the first three tracks!

Adam’s voice on the record is perfect. It’s smooth but not overly saccharine, strong but not abrasive, and his soaring tenor has me singing in my falsetto just to try to keep pace. He calls to mind Chris Thiele, not just in terms of vocal timbre, but also in his ability to effortlessly cover different styles of music. If Adam will forgive my mild Hoosiers obsession, I can say that he’s as good a songwriter, musician, and band leader as Jimmy Chitwood is a ball player.

The musicianship on Psalm Songs is as good as it gets. The band is tight and the instrument parts all fit together well–from mandolin to guitar to fiddle to bass and drums. The multi-part harmonies so characteristic of bluegrass will have you singing along as soon as you know the song. 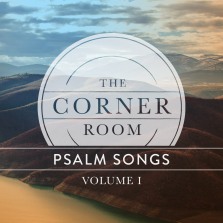 The album takes the Psalms verbatim from the English Standard Version. The ESV is not my all-time favorite translation–I will probably always take issue with the generic Hebrew or Greek word for human being translated as “man.” But that version is more fluildy poetic than I expected for the Psalms. Rare is the moment on the album when the words feel shoehorned into the music–the settings do the Psalms great justice.

Psalm 23 has been set to music so many times, one might wonder how it could be done well again. But the second track is poignant and uplifting all at once. It’s got a moving video, too:

The other two videos at this page are pretty awesome, too.

One of Adam’s driving motivations, by the way, is to help people memorize Scripture via these musical settings. I’ve found the music helpful to that end, for sure.

I could go on about how much I like this record (and my three kids are big fans, too, especially of the opening Psalm 121). But go listen for a few minutes and I suspect you’ll have the same reaction I did, that this is an album you’ll not only want to own, but will also want to get a few copies of so you can give away to others.

Check out The Corner Room’s site here. You can also get Psalm Songs on iTunes (link) and Amazon (link).

I received Psalm Songs, Volume 1 free for the purposes of review–I’ve already given away my hard copy but am happily still listening to an electronic copy.