It’s not until about 30 seconds in to Amusement Parks on Fire’s beautiful new three-song EP, “All the New Ends,” that you hear their signature, shoegazy lead guitar. It sneaks in and out of the first track, an homage to the band’s heavier sound of previous releases, even as recent as November 2017’s excellent two-song EP Our Goal to Realise.

That APOF would begin their 20-minute (!) EP with a mellow (by their standards), lilting 6/8 waltz is surprising, but this band is so good–and had been on hiatus for so long until last year–that their fans will welcome any new direction. It’s still APOF after all: a beautifully crafted song with melodic vocals and layered but not overproduced guitar parts.

That first track, “All the New Ends,” seamlessly moves into “Temporal Rinse” with a wall of distorted, tremolo-picked guitars, overlaid with high-register, ascending diads that I can only describe as reminiscent of the soundtrack of Final Fantasy IV on Super Nintendo. 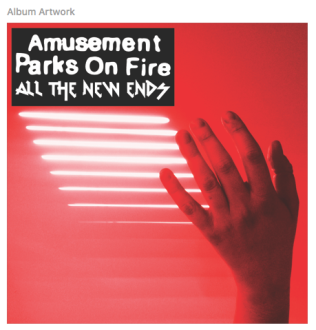 The listener expects that the band will, at some point, break through the wall of distortion and into a hard-rocking groove, much as “So More It Be” transitions to “Blackout” on their album Out of the Angeles, or as the final 40 seconds of “Road Eyes” prepares us for the almost danceable beat that begins “Flashlight Planetarium” on the Road Eyes LP.

Instead, the title “Temporal Rinse” turns out to be descriptive of the song’s role. It’s a sort of palette cleanser that moves listeners from the mellower “All the New Ends” to the epic and heavier final track, “Internal Flame.”

Rare is the song that eclipses six minutes and holds the listener’s attention the whole time. I think of the Smashing Pumpkins B-side, “The Aeroplane Flies High,” or Sun Kil Moon’s 10-minute “I Watched the Film, the Song Remains the Same,” or anything from Side B of The Cure’s “Disintegration.”

“Internal Flame” takes longer to build than those songs do, clocking in at an impressive 12:43. (This ought to convince anyone that this “EP” is easily worth its $3 in digital format.) By about the 7-minute mark, I was ready for more musical variation than the four-chord progression, but as the song structure remains constant, the band continues to add tracks: more guitars, more drums, tambourine, still more guitar lines, and probably dozens of other tracks lurking beneath the surface that make the song what it is. As an erstwhile recorder of music and writer myself, I can hardly imagine the challenges involved in tracking a 13-minute song so flawlessly.

“All the New Ends” releases in digital format on April 13, with CD and vinyl releasing likely this summer. Here’s the track listing:

Check out the album here.

Many thanks to the album’s PR team for early download access so I could write the review.

It’s always a little bit sad when a young band with a ton of talent puts out a couple of great records and then stops releasing music.

My brother introduced me to Amusement Parks on Fire in 2005. Their song “Blackout” is a shoegazing classic. They put out a couple of LPs in the mid-oughts, followed some EPs in the following years. In 2010 they released Road Eyes. I was impressed at the time, but the album didn’t impact me as much as their earlier stuff. Still, this is Amusement Parks on Fire, and even a less-than-stellar album from them is really good.

It had been quiet on the APOF front since 2010’s Road Eyes. Now, however, they are back. There’s a two-song EP dropping next week. (I love both songs.) And I hear rumors of a full-length to follow….

A few months ago the band re-released 2010’s Road Eyes as a deluxe edition. The re-release adds some demos, some tracks that came out on other EPs, and the glorious unreleased track “Airstrike.” (How this did not make it onto an LP or EP already is beyond me.) There are other previously unreleased tracks, too, giving you a full nine-track “Side B” that complements the original Road Eyes LP.

There are very few APOF songs I don’t love, and none I don’t like. I bought Road Eyes the week it came out, seven years ago, but it didn’t wow me then as much as the first two LPs. Going back and listening again now, though, I think Road Eyes is just as good as anything APOF has released. Having new music to digest in this deluxe edition is an added bonus.

I’m stoked that Amusement Parks on Fire is recording again. The deluxe edition of Road Eyes will both fill your APOF-less void and get you ready for their upcoming offerings. Can’t wait.

Check out the album here. It’s currently digital-only, but in February 2018 will be available in vinyl and CD formats.

Thanks to the kind folks at Saint Marie Records for giving me access to the album so I could write about it.