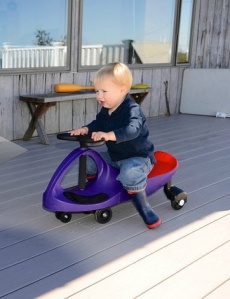 This is the family car of choice. In our house it’s called “cool, cool car,” so named by our 2-year-old. We got him one for his birthday. (Its real name: PlasmaCar.)

My wife got it for our 2-year-old after telling me she had scouted it out and that it was “toy of the year.” I’m generally skeptical of toys of the year, but this one has been a hit.

The only challenge was getting our two boys to share the one cool, cool car.

Side note: there was and is an accompanying song. It goes like this:

As I was saying, the sharing was not working out too well…until Grandma came to town and got the 5-year-old one of his very own! (Thanks, Grandma!) It’s now being called a “rocketship.”

The 5-year-old now knows how to do donuts on our back deck. The 2-year-old is not far behind. It’s hours of endless entertainment for us all.

And, yes, that’s the 2-year-old in the picture above on (you guessed it) his older brother’s cool, cool car.