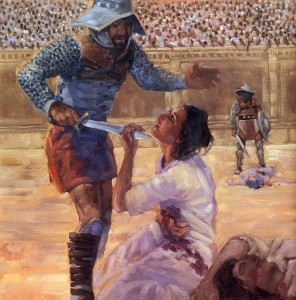 Perpetua was a nursing mother who rejected her father’s pleadings to deny her Christian faith and make the requisite sacrifice to the Roman emperor. As the story goes, depicted above, she had to help guide the sword of her trembling executioner to her throat.

The book 131 Christians Everyone Should Know, by Mark Galli and Christian History magazine, recounts her story:

Her father immediately came to her in prison. He was a pagan, and he saw an easy way for Perpetua to save herself. He entreated her simply to deny she was a Christian.

“Father, do you see this vase here?” she replied. “Could it be called by any other name than what it is?”

“Well, neither can I be called anything other than what I am, a Christian.”

In the next days, Perpetua was moved to a better part of the prison and allowed to breastfeed her child. With her hearing approaching, her father visited again, this time, pleading more passionately….

At that moment, her father, carrying Perpetua’s son in his arms, burst into the room. He grabbed Perpetua and pleaded, “Perform the sacrifice. Have pity on your baby!”

…When [Perpetua and her friends] entered the stadium, wild beasts and gladiators roamed the arena floor, and in the stands, crowds roared to see blood. They didn’t have to wait long.

Immediately a wild heifer charged the group. Perpetua was tossed into the air and onto her back. She sat up, adjusted her ripped tunic, and walked over to help Felicitas. Then a leopard was let loose, and it wasn’t long before the tunics of the Christians were stained with blood.

This was too deliberate for the impatient crowd, which began calling for death for the Christians. So Perpetua, Felicitas, and friends were lined up, and one by one, were slain by the sword.

It’s easy for me to “want to be in that number” when saints like Perpetua “go marching in,” but the courage and faithfulness she exhibited in the moments leading up to her martyrdom are qualities I can only pray to attain. The Wisdom of Solomon passage I quoted yesterday is apropos:

But the souls of the righteous are in the hand of God,
and no torment will ever touch them.

In the eyes of the foolish they seemed to have died,
and their departure was considered to be suffering,

and their going from us to be destruction,
but they are at peace.

As All Saints Day approaches tomorrow, I find myself moved and inspired by this committed follower of Jesus. Perpetua, though she was mercilessly separated from her husband, family, and precious little baby, is at peace.