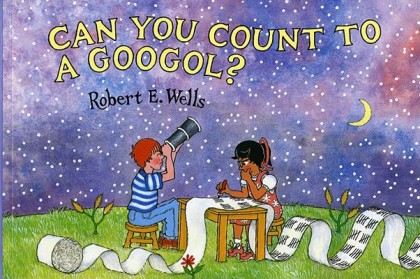 “Can you count to a googol?”

“I can’t. I think it might take a hundred days to count to a googol. You think so, daddy?”

Thus inquired my 5-year-old son as we sat down to read Can You Count to a Googol? by Robert E. Wells.

As the book worked its way through various numbers leading up to googol, it asked, “What would YOU do with ONE BILLION dollars?” My son said, “Spend it for something that is one billion dollars… but one billion dollars is a lot!”

Here’s his review of the book, in his words:

In one picture, 10 monkeys are balancing 100 bananas, and some bananas are balancing each other! And there’s a girl clapping, and a boy raising his hands, and a wagon with a basket in it. The picture is trying to show us how many 100 is.

In another picture, there’s a big thing: there’s 100 eagles carrying two people and two monkeys. And 100 penguins–each have 10 ice creams.

There’s nothing that’s googol, not even all of the people in the whole universe. Stars aren’t googol. Asteroids aren’t googol, too.

[Dad’s editorial note: When the page appeared on which a monkey and some children were writing out a googol on a board, my 5-year-old stopped and counted every 0–there really were 100.]

Thanks to Albert Whitman & Company for the copy of the book to review. Its product page is here; at Amazon here.

3 thoughts on “My five-year-old son reviews: Can You Count to a Googol?”