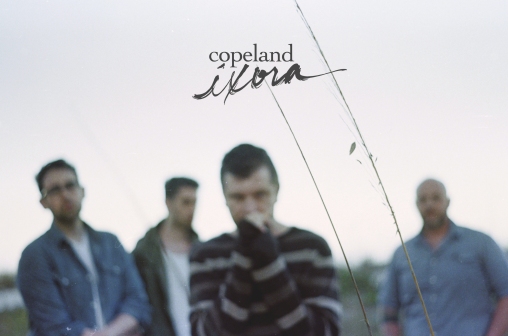 Listening to Copeland’s new album Ixora, you wonder if Aaron Marsh is making a promise to you. It has been six years, after all, since the re-united band’s last album, You Are My Sunshine.

I felt young(er) as soon as Copeland announced their reunion. The last time I saw them in concert was three children ago. Yet their first released single, “Ordinary,” speaks of embracing the mundaneness and routines that come with growing older:

Since you came along my days are ordinary.
We laugh just like yesterday,
and I kiss you like the day before,
and I hold you just like ordinary.
Perhaps when the day is new,
we’ll find tomorrow is just ordinary too.

That track is all swoony vocals and Marsh’s delicate piano playing. The band tantalizingly released a video clip of them rocking out in the studio, paired with the audio of the reflective “Ordinary.”

Then came “Disjointed,” a second single. It’s got the more familiar feel of Copeland’s Eat, Sleep, Repeat, and the band feels totally on their game here. On Ixora it’s track 2 after the gentle opener of “Have I Always Loved You?” It’s Copeland at their best–electric guitars, hypnotically beautiful piano, strings, tight bass, and drums with carefully produced tone.

By the time the band released the third track, “Erase,” I felt again like the teenager who used to wait impatiently for new albums that were sure to alter the course of my destiny forever:

Everything about “Erase” is perfect. The build, the band entrance, the string swells, the groove, the production. It is one of the best five Copeland songs ever. “Ever I was searching, endless all these days,” Marsh croons in his sweet falsetto. Even if you’re too tired to feel young again, you’ll yearn with Marsh for days “you can’t erase.”

By the time I came to the full album, I might have been hoping for too much. My first few listens left me wanting more of the transcendent moments of “Erase” and “Disjointed,” and less of the production decisions that led to the lead guitar tone at 0:34 of “I Can Make You Feel Young Again.” It calls to mind the first guitar notes of Sarah McLachlan’s “Sweet Surrender” much more than anything you’d expect from Copeland. (Though I do love “Sweet Surrender.”) The song “Lavender” felt more like it could have been a Peter Gabriel cover on Copeland’s Know Nothing Stays the Same. And “Chiromancer” has been for me the rarest of Copeland tracks that I’m likely to skip on future listens.

But maybe those are just the kind of inevitable “ordinary” moments that Marsh sings about. Ixora has grown on me, after all, even as an unremarkable daily routine can become comforting.

And there are other standout tracks besides “Erase” and “Disjointed.” What I really love about the opening track, “Have I Always Loved You?”, is that the band eases in, instrument-by-instrument, as if they’re coming back from behind the stage one-by-one to play an encore an adoring audience didn’t think they’d actually get.

Is this Copeland’s best album to date? I still think Eat, Sleep, Repeat holds that title. Ixora has some of the unevenness that I thought characterized You Are My Sunshine, but this album holds together better. And I will probably listen to it another 20 times next week, too.

Copeland is an inspiring band; they bring the listener up with them into moments of transcendence in a way that few other bands in their genre do. I’m thrilled that they’re back together, and hope that Ixora is just the beginning of many more Copeland albums to come.   8.5/10.

You can get Ixora on iTunes and Amazon this coming Tuesday. Thanks to Big Picture Media for the pre-release stream so I could review the album before my iTunes pre-order arrives.

You can stream also stream Copeland’s Ixora on Spotify here: