Grandma and Grandpa, this post is mostly for you. (Others: feel free to keep reading if you want.)

My seven-year-old son received a LEGO Store gift card from his grandparents. So we went on a Saturday morning to the LEGO Store to pick out a couple of sets. I’ve always been an indecisive shopper, and he showed some signs of that (how could you not?), but made a good decision that he stuck by.

One of the sets he got includes Batman and the Flash. Here’s his build of the Batmobile: 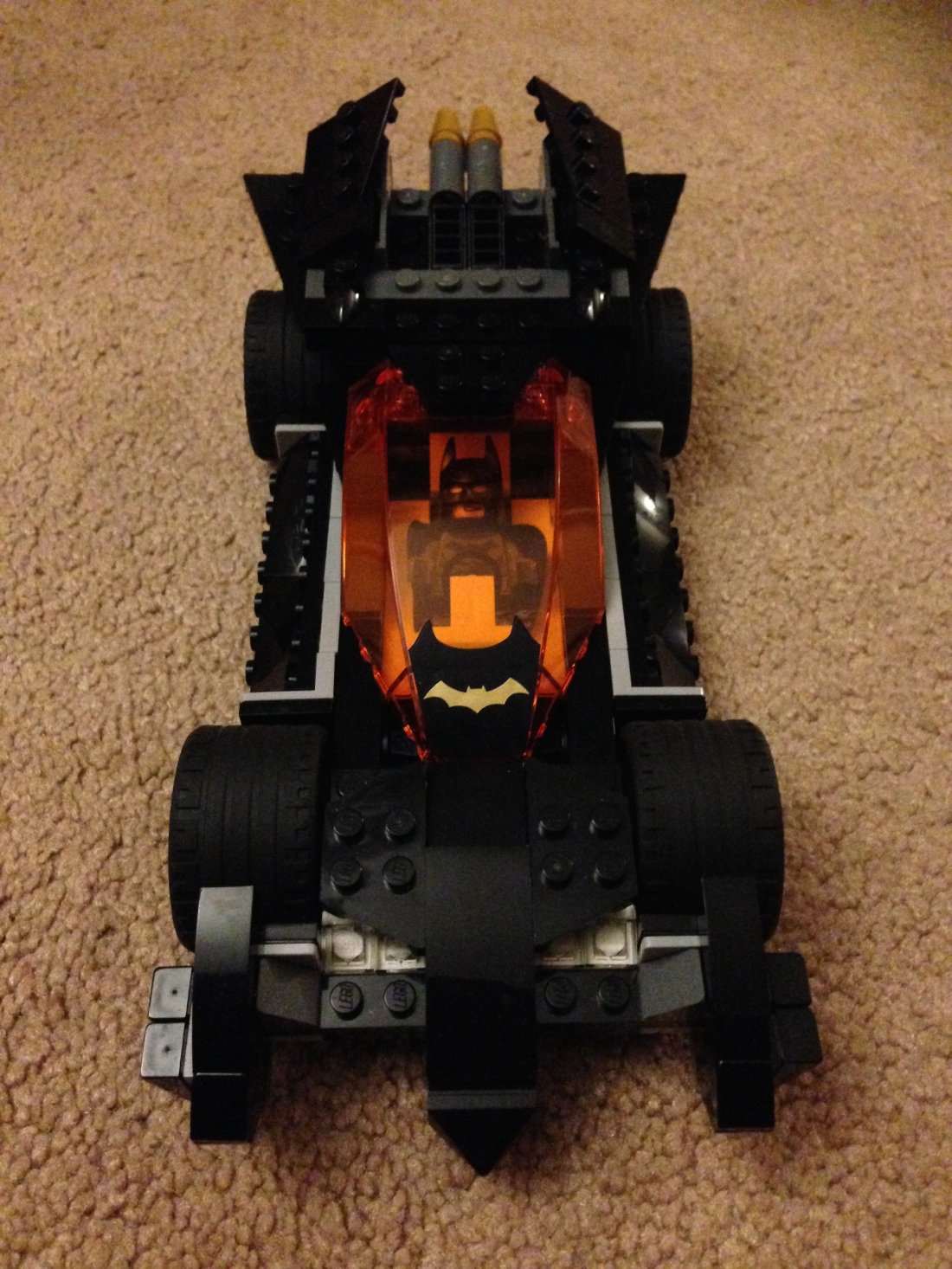 The best part is he’s been sharing quite nicely with his brother!

Here, by the way, is the set. Thank you, Grandma and Grandpa! 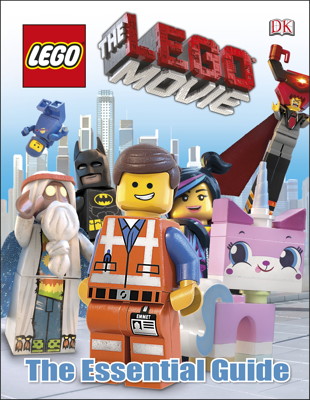 We are big fans around here of The LEGO Movie. My then-six-year-old offered a review of The Official Movie Handbook and the Junior Novel. My favorite two parts of that interaction were: “Emmet…falls out of a tower that, like, goes past heaven,” and his description of Bad Cop as “a bad police.” (No, I’m the only one who watches The Wire around here.)

DK’s Essential Guide does a great job of covering the movie. It has colorful two-page spreads of the main characters (Emmet, Wyldstyle, Benny, and more), as well as sections like “Emmet’s Big Idea” and “Everything is Awesome,” so you can learn all the lyrics to the movie’s catchy tune. “To the Kraglizer” shows both Benny’s Spaceship and Emmet’s Construction Mech–you get to see not just scenes of the movie, but the sets as they are currently packaged and offered by LEGO now.

A two-page “Behind the Scenes” section closes the book with Q and A, including such questions as “How much of The LEGO Movie set was developed as real LEGO models?”

The book is a bedtime (and daytime) favorite with my four-year-old and seven-year-old. They keep coming back to it. It’s great for bedtime reading, because, although we can’t read all 64 pages before bed, I can tell the kids we’ll read three characters, which can easily keep us engaged for 10 minutes. There’s a lot to pore over here. (MetalBeard’s short “Guide to Pirate Speak” on page 47 was fun.)

Here’s a look inside The Essential Guide, from the publisher’s UK page: 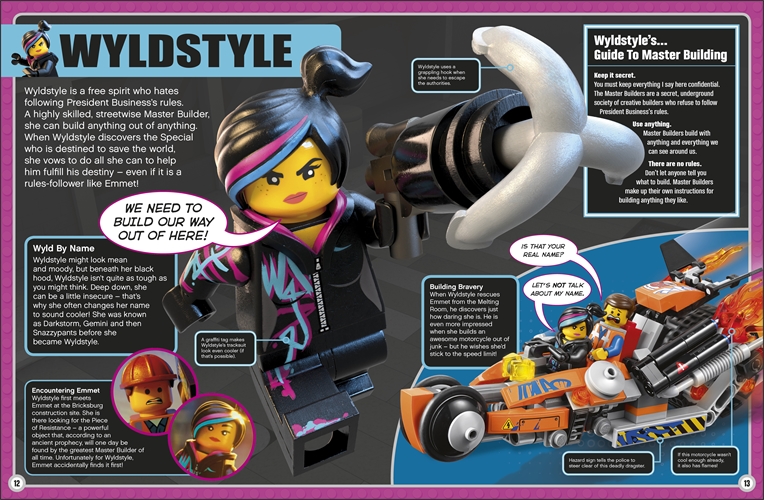 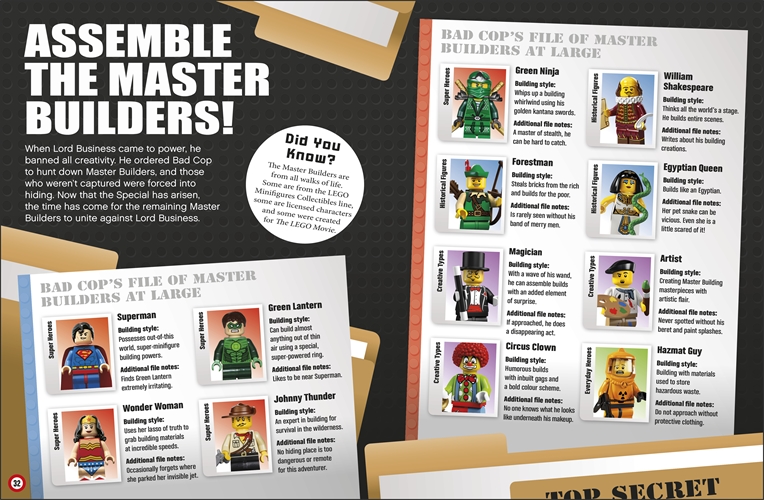 Lots of entertainment is waiting to be had here–our DK Essential Guide to the Cars movie is a well-loved household item, now missing its fold-out insert (from so much love). The LEGO Movie: The Essential Guide is already similarly appreciated around here, though all the pages are so far still in tact!

Thanks to DK Publishing for the review copy, given with no expectation as to the content of the review. Find The Lego Movie: The Essential Guide here at Amazon (affiliate link) or here at DK’s site.

Having seen and thoroughly enjoyed The LEGO Movie, my six-year-old son has been reading a couple of related books: The LEGO Movie: The Official Movie Handbook and The Lego Movie: Junior Novel.

The Movie Handbook packs a lot in, both text and full-color illustrations, especially for the price.

In the words of my six-year-old, “It’s really good. If someone had never seen it, I’d say that the best pages ever are ‘Where are My Pants?’ This is an episode of a TV show in Bricksburg in The LEGO Movie.”

[Dad’s editorial note: it’s more tame than it sounds, and one of the funnier parts of the movie, which is quite clever throughout.] 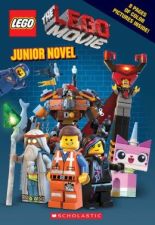 Here are some of the characters in the books, as told by my six-year-old:

Here’s a look inside the Movie Handbook:

The Junior Novel is more than 100 pages of text at a level that seemed to be just right for a six-year-old. Its opening lines are as silly as the rest of the book and the movie:

Bright red lava flowed from the volcano that marked the entrance to the hidden temple. Inside, a mighty weapon called the Kragle was nestled in a glowing sarcophagus.

Here is a shot of the Table of Contents from the Movie Handbook:

The books tie in well with the movie, yet still leave a lot on the screen. The Movie Handbook also comes with a fold-out poster, which is now taped to the ceiling above my son’s top bunk bed.

A couple weeks ago I took my six-year-old son to his first ever movie at a theater–The LEGO Movie. He loved it.

There were a couple scenes that were maybe a little too intense for a six-year-old, and a wee bit of potty language (he doesn’t need any encouragement), but other than that, it was a movie I could feel good about taking him to. It’s funny, fast-moving, and has incredible animation. There are clearly a lot of creative minds behind the movie.

Last Christmas a day full of opening presents was overstimulating for our kids, who were at that time all five and under. This year we got a little smarter (or were just better prepared) and let the children drive the presents-opening. If they wanted to stop and play with a present, we let them. If they were ready to open a new one, we let them.

It worked out pretty well. Our two boys each opened a Lego set early in the day, with homemade Lego storage/building trays from the grandparents, and played with them for much of the morning. Then, after a while, we moved into round two of opening gifts. All in all, we opened about 90% of the presents in three different stages on Christmas Day. We’ve opened the rest since then.

Leading up to Christmas we followed our family tradition of nighttime prayer and song and candles with an Advent Wreath. Our six-year-old took the role of “leader” most nights, our three-year-old was “acolyte” (i.e., he blew out the candles), and our one-year-old was the altar guild. (And by “altar guild,” I mean she climbed up on to the table and tried to take apart the wreath and candles.) The short liturgy had the same centering effect for our kids this year as it did last year, though this year there was more fighting over who got to do what.

Two lessons learned as a dad:

#1: It’s easy, even in a Christian home, even when you’re a pastor, to let other things besides Jesus rule your consciousness during the Advent and Christmas season. This feels like it might be a yearly challenge, with due deliberateness required to keep the focus where it should be.

#2: Following the kids’ lead as much as possible leads to a more pleasant Christmas Day. There’s no need to rush through opening presents. (And children seem to receive a lot.) I think how we handle #2 has direct bearing on #1.

I’ve been thinking now about the possibility of giving gifts in each other’s names to charitable organizations as the kids get older. This could become a meaningful part of our Christmas celebrations in coming years.

Parents of kids–what about you? How do you navigate Christmas and the days leading up to it with kids? What are challenges you face? What’s rewarding about it? What helps your family keep focused on what matters most?