I have been benefiting lately from the wisdom of N.T. Wright. His For Everyone series now covers every book of the New Testament, with each passage being preceded by Wright’s own translation of Scripture.

I describe the series here. And here I review the Luke volume in further detail. In this post I’ll review the usefulness of the series in Logos Bible Software, both on an iPad and on a computer.

Logos syncs automatically across multiple devices and platforms. Its iOS app for iPad is one of the apps I use the most. It’s just recently received a nice makeover. It looks like this:

Here’s how I set up Wright in the app. You can sync the two windows of the app so that they move together, passage-by-passage. I.e., if I advance the Bible text in the top window, the commentary at the bottom follows.

You’ll also note that you can highlight as needed, which then shows up in Logos on any other device, almost instantaneously. The pop-up is a note I took (“Even if we know what’s coming, we’re surprised”) on this section of Wright’s commentary. Notes also sync automatically.

The desktop/laptop version of Logos offers even more options for using Wright side-by-side with other resources:

The little “C” at the bottom left of each of the book images shows that I’ve linked resources together, so that they scroll in tandem. In the above, I can work through English and Greek texts, with Logos’s clausal outlines and Wright’s commentary all open. The other tabs to the left and right of Matthew for Everyone are other commentaries to consult. I have all of the above saved as a workspace called “Preach Matt,” to which I can come back at any time.

One feature I appreciate is that if I type “John 1:1” into the search window of one of the Bible texts, the N.T. Wright window automatically goes to Wright’s commentary on John, even though it’s a different book in the set. And you can see that my highlight and note from iOS automatically came over to this version.

In general I find Accordance commentaries a little easier and quicker to search with their specific content fields (where you can search by reference, by English content, by Greek content, etc.). But the command (or control) + F search box gets the job done just fine in these commentaries. (For more on searches and content fields, see the discussion on the Logos forums here.)

I write more in depth about using Logos for a commentary series here. I’ve found Logos to be more responsive on a PC laptop (and it seems to index less) than on a Mac laptop.

Whether it’s through iOS or at a computer, I recommend N.T. Wright’s companionship through the Bible. The print volumes, of course, do just fine, but the Logos edition of Wright’s commentary set has some nice features that enhance study of the New Testament and use of the For Everyone series.

I’ve been seeing too much Upworthy in my Facebook news feed lately! Apologies for the sensational blog post headline.

He told me to really get the feel of the language. I shouldn’t think of Greek just as a one-to-one code for English; I should get into the Greek itself. I asked him what he thought about reading with a diglot, but he encouraged me to check the English translation only after reading an entire Greek paragraph, and then, only as necessary.

It’s challenging, but I’ve benefited from that advice multiple times.

The For Everyone Series

Over the years I’ve made occasional use of his For Everyone Bible commentary series. Written under the name Tom Wright, the series brings Wright’s extensive knowledge of the biblical text and history to a general audience. Anyone wanting to know more about a passage–whether they are preaching from it or reading it in their personal devotions–would benefit from the series. It’s decidedly non-scholarly, but even scholars will find useful information here (if a bit simplified at times). Here is how Wright introduces the series:

But the point of it all is that the message can get out to everyone, especially to people who wouldn’t normally read a book with footnotes and Greek words in it. That’s the sort of person for whom these books are written.

Though Wright is a prolific writer of scholarly works, he writes well for a general audience–a rare combination. Throughout the series Wright puts key terms in bold, which the reader can then look up in a corresponding glossary (e.g., Gehenna/Hell, Covenant, Age to Come, Law, Faith, Son of Man, and more).

Between this package and this upgrade, Logos Bible Software offers the entire 18 vol. set. In a future post I will review Logos’s presentation of the series. Here I post about its content. 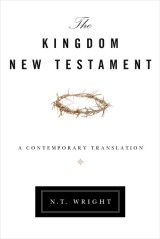 Wright splits each biblical book up into manageable passages. His original translation does a good job of striking the balance he seeks of faithfulness to the original and readability. Here is a passage in Wright’s translation:

18 Against all hope, but still in hope, Abraham believed that he would become the father of many nations, in line with what had been said to him, ‘That’s what your family will be like.’ 19 He didn’t become weak in faith as he considered his own body (which was already as good as dead, since he was about a hundred years old), and the lifelessness of Sarah’s womb. 20 He didn’t waver in unbelief when faced with God’s promise. Instead, he grew strong in faith and gave glory to God, 21 being fully convinced that God had the power to accomplish what he had promised. 22 That is why ‘it was calculated to him in terms of covenant justice’.

Wright explains, “The older language, ‘it was reckoned to him as righteousness’, gives off so many different messages now that it’s hard for us, hearing it, to think the thoughts Paul had in his head.” His translation is fresh, yet is not a paraphrase (like Eugene Peterson’s Message, for example).

“Come to Him, by Whatever Route You Can”

The For Everyone series, though divided into discrete passages, shows a literary sensitivity so that the reader can see how a given section connects to the larger flow of the book. For example, of the above passage, Wright writes:

The last verse of the chapter anticipates something Paul is going to do throughout chapters 5-8. He rounds off every stage of the argument in this long section with a reference to Jesus. This isn’t a mere pious gesture, smuggling in a mention of Jesus in case we thought he’d forgotten about him. It shows, rather, what the whole argument is all about. It brings us back home to the source and power of Paul’s thought.

Though preachers are not the target audience, the series is a good one for preachers to have on their shelves. There is not the same sort of explicit homiletical guidance that Feasting on the Word offers on every passage under consideration, but Wright is not short on practical application. For the Romans passage above, he concludes:

Do we share Abraham’s faith? Do we look in love, gratitude and trust to the creator God who promises impossible things and brings them to pass? Have we learned to celebrate this God, and to live as one family with all those who share this faith and hope?

Similarly, in Matthew’s account of the Magi’s visit to Jesus, Wright notes that the inclusion of the Gentile Magi already in chapter 2 shows one of Matthew’s themes–that Jesus is king of the Jews, and of all people. He concludes:

Listen to the whole story, Matthew is saying. Think about what it meant for Jesus to be the true king of the Jews. And then—come to him, by whatever route you can, and with the best gifts you can find.

This application comes after Wright succinctly answers who the Magi were, what the “star” they saw might have been, and what Old Testament passages are at play in the Epiphany narrative.

In Conclusion (So Far): One of the Best Reading Guides

Wright’s style is conversational, engaging, highly readable, and stimulating on both an intellectual and devotional level. As I make my way through more of the series, I’ll post more about it (with screenshots of how it looks in Logos for computer and iOS). But so far I’m a big fan of what I’ve seen. The Luke volume was a frequent reference as I preached through parts of Luke this fall.

If you’re reading through the Bible, and want to have a substantive yet concise reading guide for the journey, Wright’s For Everyone series is hard to top.