I just learned about this fascinating Website intended for Bible translators, which is also useful for preachers or anyone who wants to better understand the Bible. It’s called TIPs, which stands for “Translation Insights and Perspectives.” Here’s the site description:

God’s communication with humanity was intended from the beginning for “every nation, tribe, and language.” While all languages are equally competent in expressing the message of the Bible, each language has particular and sometimes unique capacities to communicate certain biblical messages in exceptionally enriching ways that other languages cannot. The Translation Insights and Perspectives (TIPs) tool collects these outstanding translation insights in the form of stories so they can be made available to everyone in the church as well as researchers and other interested parties.

There’s a great explainer video here.
You can search the site by word or phrase or even language.
Here’s just one of many insights at the TIPs site. Revelation 3:20 says, “Here I am! I stand at the door and knock. If anyone hears my voice and opens the door, I will come in and eat with that person, and they with me” (NIV). Searching the TIPs site yields this translation anecdote:

For the translation of this verse into Maasina Fulfulde Doug Higby tells this story:

“[We] had the word for ‘door’ and also a word for knocking or ‘hitting’ a door. But as I thought about it, Jesus was coming to visit! The Fulani don’t even have doors on their traditional huts, and they certainly don’t bang on the reed coverings used to keep the dust out of the doorway. If Jesus came, he would go to the entrance of the courtyard and say, ‘Salaam Alaikum.’ This would announce his presence in the same way that knocking on a door would in Western contexts. But I was concerned… the Greek text says ‘door’ and I wanted to be faithful to the original. Yet, I felt the Fulani customary greeting was exactly what Jesus would do in this context, so I continued. To my great surprise, the next part of the verse went: ‘Anyone who hears my voice and opens the door…’ Voice?! Who said anything about Jesus speaking, I thought he was knocking… So now the Fulani greeting makes even more sense with the cultural version which goes like this: ‘I stand at the entrance (to your courtyard) and greet (in peace). Whoever hears my voice and lets me in, I will enter and eat together with him.’ (Hettina, miɗo nii darii e damal miɗo salmina. Neɗɗo fuu nanɗo daande am so udditi, mi naatan galle mum, mi ɲaamda e mum.).”

I keep coming back to the NIV translation of the Bible. The (now discontinued) TNIV and the 2011 NIV (which supersedes the TNIV) are constant companions in my Bible reading and sermon preparation.

Bruce Waltke anticipates that the NIV will be “ever more precise and always in the language of the people” as it continues to evolve. 50 years ago the Committee on Bible Translation (CBT) convened.

The first three speakers in the following video–Doug Moo, Karen Jobes, and Mark Strauss–are all ones whose works I’ve consulted (literally) in the last two days!

There is an utterly fascinating history of how the translation has changed over the years. I am particularly interested in the discussion about how gender works in translation. I’m with Bruce Waltke on this one:

If you use “man” and part of your constituency is hearing it as male, and it wasn’t intended to be male, that’s bad translation.

For the coming [1990s] edition, the CBT decided that where the Greek or Hebrew clearly referred to all people—male and female—the translation would have to find accurate contemporary English language to make this clear.

But before the CBT could release the update, a Christian magazine learned what the CBT was planning and published an article condemning the shift in language, initiating a firestorm of controversy.

Some Christians were unhappy about what the CBT was planning. They accused the CBT of a “feminist” agenda when, in reality, the only agenda CBT had was to accurately reflect the meaning of Scripture in modern English. But the heat of the controversy made it hard for people to understand what was really going on.

The issue became so heated that the International Bible Society (now Biblica) decided that it was not in the best interest of the translation to continue and chose not to publish the revisions. In the United States, Zondervan would keep printing the 1984 edition of the NIV.

Finally, in 2005, the TNIV was born. But the publisher wanted to unify the now two separate editions, paving the way for the 2011 NIV.

Read the whole history here–it’s not a quick read, but it’s quite interesting. And it’s also sad how parts of the Christian community pushed against what would be not just a gender-inclusive, but a more gender-accurate translation.

There are tons of NIV Bibles available, many of which are detailed here. I’ve had a chance to compare a number of the Bibles, so feel free to ask in the comments if you want to hear more… or share your own thoughts on the NIV translation.

It seems I’m blogging fairly regularly about Zondervan and its products. They have been gracious to provide copies of various products for my review purposes. 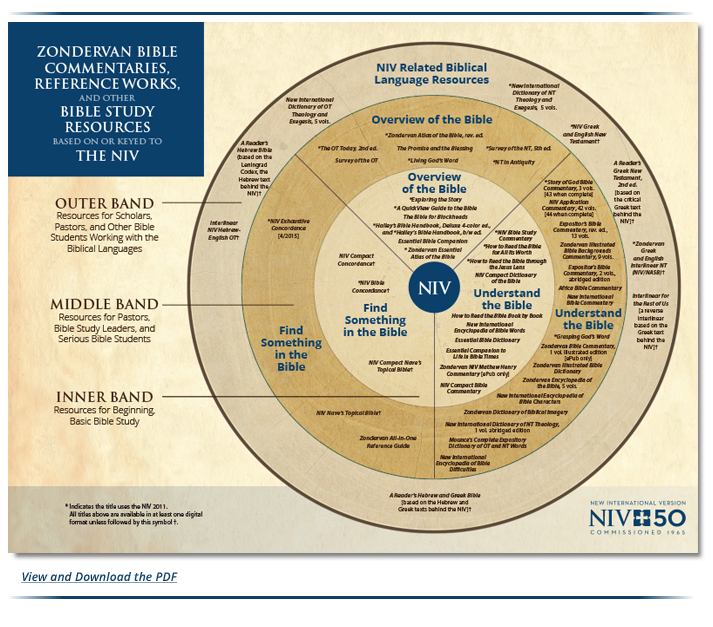 Whether it was for summer camp or Bible quizzing, I grew up memorizing the (1984) New International Version. And, yes, I’m still quite fond of the unfortunately discontinued TNIV. Now Zondervan no longer publishes the 1984 NIV, nor the TNIV–instead, the 2011 update to the NIV is the current version.

You might not realize that the NIV is 50 years old this year. Here’s a recent press release:

In 1965, the Committee on Bible Translation took on the most massive translation project of modern times: to prepare a contemporary English translation of the Bible from the best available original manuscripts. Since its release in 1978, the NIV has become the world’s most read and most trusted modern-English Bible translation with over 450 million copies distributed worldwide. Upon the 1978 release of the NIV, readers were ecstatic that they could finally understand the Word of God in contemporary language.

This anniversary got onto my radar screen when I came across the new NIV 50th anniversary app. What I didn’t know till the other day is that the NIV Study Bible is the best-selling study Bible in the last 30 years.

Here’s a video with some recognizable names discussing the work of the Committee on Bible Translation, who produced the NIV:

You can read more about the NIV here.

Disclosure of Material Connection: A Zondervan rep approached me with an invitation/encouragement to post about the NIV, and offered to send an NIV Study Bible. I plan to post about that in due course, too, once I receive it. While I do appreciate the 2011 NIV over the 1984 NIV in a number of ways, said “Material Connection” has not diminished the place in my heart that the TNIV will always have.

From A Greek-English Lexicon of the Septuagint (Lust/Eynikel/Hauspie):

When preparing a lexicon of the LXX, one is faced with several basic questions related to the fact that most of the books of the LXX are translations. This lexicon is supposed to give the meaning, i.e. the English translation equivalents, of the words used in the LXX. However, which meaning should be given, the one intended by the translator or the one understood by the readers for whom it was intended? Is reference to be made to the underlying Hebrew or Aramaic, or is the search for meaning to be confined to the Greek? These questions are interrelated and connected with the special character of “Septuagint Greek.”

This made me think of something I just read in Roy E. Ciampa’s chapter, “Approaching Paul’s Use of Scripture in Light of Translation Studies,” in Paul and Scripture: Extending the Conversation, edited by Christopher D. Stanley.

Readers and how they understand texts are an issue, too.

Ciampa says in another place:

Paul’s interpretative method is closer to the idea of an indirect translation—one that that only partially resembles the original text and its meaning, retaining only those parts that are relevant to those to whom his interpretation is being transmitted. He may be aspiring not to complete interpretive resemblance with the original but only to partial resemblance, making alterations in order to adapt the text and its message in ways that optimize its relevance for his congregations.

The questions raised by each of the three above quotations are all reasons I am interested in studying the Septuagint, and now the use of the Old Testament in the New Testament. I’m learning that it’s so much more than just, what text did the NT writers have at hand, but also: how did NT writers use a text (whether Greek or Hebrew) to fit the needs of their writing and their audience? It’s a lot to unpack, and some of it is near impossible to know. But exploring questions like these strikes me as time well spent, even if I’ve unearthed more questions than answers for the time being.