2. The Torah: A Modern Commentary 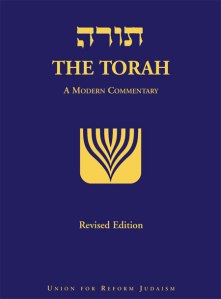 Like the JPS Torah Commentary, the Modern Commentary includes the Hebrew text (with pointed vowels and cantillation marks) and English translation. Most of the Torah is in the new Jewish Publication Society (JPS) translation (with updates for gender-sensitivity), but the English translation of Genesis is the work of the late Rabbi Chaim Stern.

Most noticeable in Stern’s translation is his use of “the Eternal” to translate the tetragrammaton (YHVH). The Preface to the Revised Edition explains:

The root meaning of the divine name in Hebrew is “to be,” and the name “Eternal” renders that name according to its meaning rather than its sound. That is, it conveys the overtones that an ancient Israelite would have heard when encountering YHVH as a name.

For example, last Sunday I began to wonder whether the story of Babel (Genesis 11:1-9) was, among other things, an anti-empire polemic. Moving through the “Gleanings” in the Modern Commentary, I found the following early sources:

As the tower grew in height it took one year to get bricks from the base to the upper stories. Thus, bricks became more precious than human life. When a brick slipped and fell the people wept, but when a worker fell and died no one paid attention.
MIDRASH

They drove forth multitudes of both men and women to make bricks; among whom, a woman making bricks was not allowed to be released in the hour of childbirth, but brought forth while she was making bricks, and carried her child in her apron, and continued to make bricks.
BARUCH

The commentary nicely blends cultural background, sensitivity to the history of Jewish interpretation, and application-ready insights, as here in the comment on Genesis 12:1-9:

For while Abram’s story must be read as the biography of an individual, he (and this applies to the other patriarchs as well) is more than an individual. The Torah sees the patriarch as the archetype who represents his descendants and their fate.

I especially appreciate how Accordance Bible Software lays out the commentary and all its sections; I’ve been using it in that medium (click to enlarge).

The publisher offers quite a generous (70 or so pages) .pdf sample of the Torah Modern Commentary, which you can read here.

You can find The Torah: A Modern Commentary here at the publisher’s page or here at Amazon.