Alternote is an Evernote client–yes! an Evernote client does exist–for Mac. If you use Evernote and have any level of dissatisfaction, especially with its layout, you should consider Alternote. It may not be a fully suitable replacement for Evernote, though. I explain why in my review below.

As with Evernote, Alternote gives you three panes: the sidebar, the Notes pane, and the editor window with Note content. You can hide the sidebar to have two panes, or go into distraction-free mode, where you simply view the note you’re writing in.

There are some nice font options, as well as the option to get into a visually pleasing Night Mode: 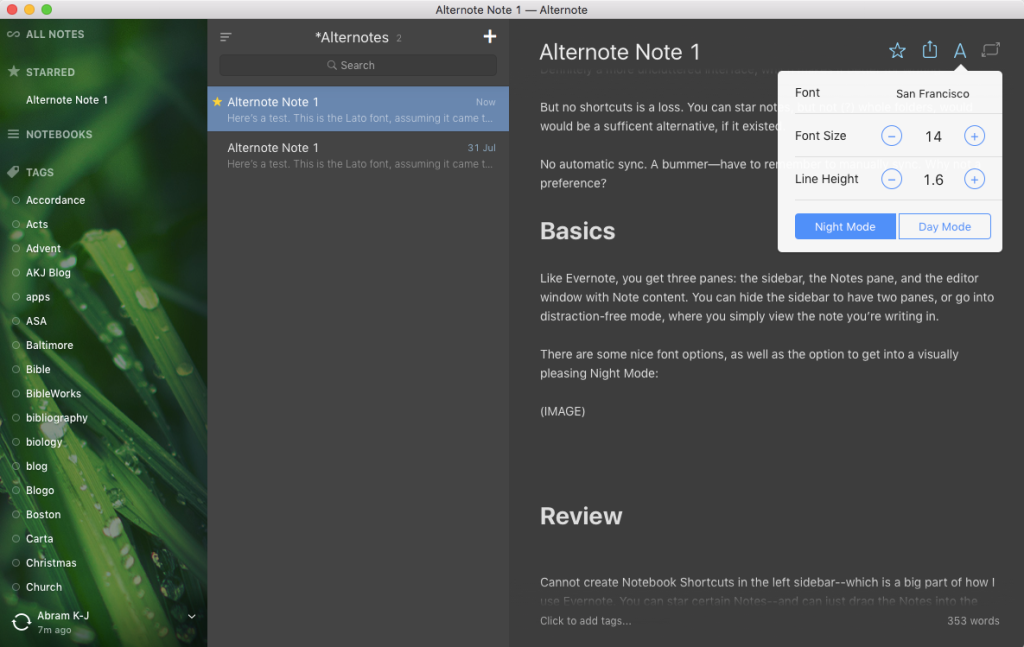 This makes Alternote a much more appealing app for writing on a Mac. If you use Evernote to organize substantial amounts of text (i.e., more than just Web links), you’ll appreciate the look and feel of Alternote.

You can successfully drag a file or image into a Note in Alternote. What does not work in Alternote is dragging a PDF, for example, into the app to make it its own Note. I hope a future update adds this feature, as I consider it to be somewhat basic Evernote functionality.

You cannot create Notebook Shortcuts in the left sidebar–which is another big part of how I use Evernote. You can star certain Notes for easy access—and can just drag the Notes into the sidebar to do it–but not Notebooks.

This means Notebooks—especially the few you use most—are a little trickier to navigate in Alternote. You can scroll down the sidebar list, of course, or—what may be quicker—access them via a drop-down menu.

Alternote feels lighter than Evernote, for which I appreciate it, but it’s not necessarily faster or higher-performing. I had expected it would be. On the other hand, if you’re using the Basic Evernote level, you won’t get bombarded in Alternote with a steady stream of upgrade ads!

One nice touch in Alternote is that you can selectively sync your Evernote content. 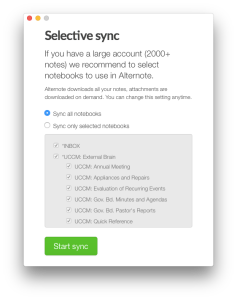 That said, automatic sync maxes out at every 15 minutes in Alternote, which will not be automatic *enough* for some. I was worried when I was writing this review (in Alternote!) and it crashed without having finished a sync. (Alternote is pretty good but still a little buggy on El Cap.) Fortunately my text was still there in Alternote, but I was eager to force a manual sync after that. I’d had some initial sync misses with my initial setup, which a revision had fixed, so hopefully Alternote will sort all this out soon. I haven’t lost any data, however, so you’re safe in using it, for the most part.

The greatest asset in Alternote is its more uncluttered interface, which makes it better than Evernote for just plain writing. If Alternote would improve its sync issues, overall speed, and add other bits of core Evernote functionality, it could easily become your go-to app for managing Evernote.

An Alternote iOS app is in the works and slated for Spring 2016. Get it in the Mac App Store here, and check out the Alternote site here. If you don’t have an Evernote account, I recommend it; learn more here.

Thanks to the people at Alternote for the app download for the purposes of review.

3 thoughts on “Alternote: An Alternative to Evernote for Mac”