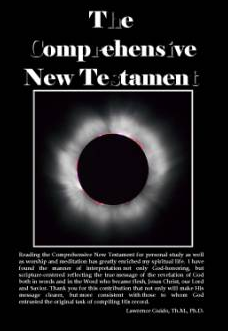 I don’t really think there is such a thing as a “literal” translation of the Hebrew or Greek Bible. Too much is lost when going from any one language to another to be able to claim literalism. As Dave Brunn points out, to translate is to necessarily change the form. The only way one could keep the form of Hebrew or Greek is to leave the text in Hebrew or Greek.

The Comprehensive New Testament claims to be “the most accurate translation of the Nestle-Aland 27th edition Greek New Testament ever produced” (Preface, i), which first struck me as a rather grandiose claim. However, the editors of that work seem to agree with Brunn in saying that “no translation can perfectly reproduce the simplicity and beauty of the original words” (i). Their claim to accuracy is not a claim regarding their original English translation of the Greek New Testament. Rather, it means that they use the Greek of the NA27 as their underlying text. Other translations may begin with that as a base, but will make textual decisions that means their underlying Greek is not identical to the NA27.

There are four primary features to The Comprehensive New Testament:

1. It is “standardized to the Greek New Testament text of the Nestle-Aland 27th edition and the United Bible Societies 4th edition.”

Why this edition of the Greek text? Editors T.E. Clontz and J. Clontz note the Protestant and Catholic agreement on the text tradition (“Alexandrian”) of the NA27 as the basis for English translations of the New Testament.

The editors seem to agree with the idea that no translation is truly literal, yet they still want to “translate the right words–and not words created by scribal mistakes or editorial changes” (i). I agree with them that the “words given through the apostles deserve our best efforts in return.”

One should still be clear, though, that even if the NA27 represents the best manuscript tradition, we don’t have the original autographs. I do believe we probably have something very close to that, but it certainly doesn’t threaten my high view of Scripture to think that there might have been a few “scribal mistakes or editorial changes” between the time of writing and the earliest manuscripts we have access to. The editors aren’t claiming access to the autographs, though, just to the NA27.

There is now a 28th edition of the Nestle-Aland text, with a few changes made from the NA27. How does this come into play? Of course, The Comprehensive NT was published before the NA28 by about 5 years, but it does raise a question for possible future editions of this volume. (I.e., did the NA27 have the wrong text? Does the NA28 have it right now? etc.)

All of these are minor quibbles, though, and no textual variants seem to make major theological differences to our faith. Indeed, the editors note that “throughout the 15,000 variations translated in this New Testament, we find the same message, and the same gospel” (i). Agreed.

The reader of this volume should understand, however, that even using the NA27 at all times doesn’t remove textual ambiguity. For example, in Galatians 1:2 Paul uses the Greek ἀδελφοὶ to describe those “who are with me.” This post is not the place to engage seriously the issues surrounding translation and gender, but given the amount of female ministry companions Paul generally had, the translation found in the NIV (2011) of “brothers and sisters” is almost certainly the more accurate translation. (In Greek, a masculine plural noun like adelphoi could be all males or a mixed group of males and females.) The editors have retained the underlying Greek, but have translated it in a way that not all will agree with.

Also, to take another example, in Romans 16:7, there is debate around whether Paul names Junia (female) or Junias (male) as an apostle. The prevailing scholarly theory is that he has Junia (female) in mind, but the Greek word itself is not conclusive, since   EDIT/UPDATE 7/24/13: Earlier printings of NA27 did indeed have Ἰουνιᾶν (male), but as of 1998, printings now contain the unequivocally female Ἰουνίαν (Junia).  The Comprehensive NT has “Junias” (male) in translation. It’s impossible to prove with 100% certainty one view over the other, but even with a solid base of the NA27 at every turn, there are still ambiguities to be resolved in translation.

The editors encourage and facilitate the use of multiple translations when studying the Bible. To this end they offer “complete textual variant mapping” so one can easily see what other translations have for given words and verses. The preface says this is “something that no other translation offers” (i.e., “footnotes for translations beyond our own”). That’s not entirely true, as the NA27/NET diglot offers the same feature (see here).

It’s a useful and time-saving feature, though… a sort of compendium of English translations.

The Junia example above (Romans 16:7) notes the many translations that have Junia over Junias (NESV, HCS, KJV, etc.). They ascribe “Junias” (male) to the Alexandrian tradition while saying that “Junia” (female) is from the Byzantine tradition. Unless I’m missing something, it’s not quite this simple, as the NA27 itself can easily be understood as referring to a Junia. Here it’s not a question of text tradition, but rather of interpretation and translation.

The notes don’t contain rationale for the translation of the New Testament, but they don’t purport to, either.

3. It scores high on a readability scale, only requiring “a sixth grade reading level.”

I don’t doubt the high score, but the presence of words like “behold” and “begotten” (in John 3:16) and “hallowed” (in the Lord’s Prayer) stood out to me as something that a sixth grader would probably need to ask about. The New Living Translation, by comparison, has “one and only” for John 3:16 and “may your name be kept holy” instead of “hallowed be your name” in Luke 11. These latter translations, I think, are better suited to a younger age group and reading level. This translation is not abnormally wooden, though, as some “literalistic” translations (e.g., the NASB) can be. I’m just not sure I’d fill a middle school youth room full of these Bibles (intriguing cover image notwithstanding!).

Many of these pages also include excerpted text from the above.

This is the best feature of this book, in my opinion. Anyone who wants to thoroughly research the early Christian and early Jewish literature that has to do with a given New Testament verse will save loads of time by referring to the reference list.

From Genesis and Jubilees and Sirach on Abraham in Romans 4 to a juicy quote by Papias that claims Matthew “composed the oracles in the Hebrew language,” this section is a great scholar’s companion. The preface provides a concise and helpful overview of the texts covered (e.g., Pseudepigrapha: “claim various Old Testament individuals as authors”).

Accordance Bible Software has released The Comprehensive NT, and one can see the advantage to using a hyperlinked, electronic version of these references (see here). As one reviewer noted, having this extensive list of cross-references will save many a trip to a theological library.

Whatever my critiques above regarding the translation itself, the hundreds of pages of cross-references alone make purchasing the less than $20 book an easy decision. I know of no other single work that gathers so many references in one place, sorting them by New Testament verse. It’s a great starting point for research papers or in-depth Bible studies that want to take into account other extra-biblical writings.

Find out more about The Comprehensive New Testament here or here. Thanks to Cornerstone Publications for the review copy. The translation and cross-references are also available in Accordance Bible Software, here.