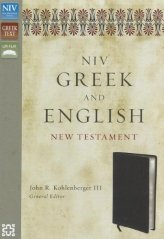 Zondervan continues to publish great resources for learning and using Biblical Greek and Hebrew. I reviewed their Greek and Hebrew Reader’s Bible here. Now they have published a “diglot,” a Bible with two languages side-by-side, on facing pages, for the New Testament.

This is also known as a “parallel Bible,” so that the reader can easily see both the Greek and English side-by-side. It’s not an interlinear Bible, though (English interspersed line-by-line with Greek), so you can easily just read all English or all Greek any time you want to. Both the Greek and English section headings are the same (in English), which makes it easy to stay on track when reading through. Each page is single column format.

The Greek text is not the scholarly NA27 or NA28 critical edition. Rather, it is the Greek text that the NIV translators agreed on as the textual basis for translation. The few times (and there aren’t a ton of instances) when this Greek text differs from the NA27, footnotes provide additional information.

Greek font preference can be subjective, but I find this one pleasing and easy to read:

The italics are for an Old Testament quotation.

The leather/Italian Duo-Tone version has a single ribbon for marking one’s place. Its feel is pleasant and flexible, yet durable. It’s a well-made Bible.

I wondered when reading whether not having the critical Nestle-Aland Greek in front of me would be a problem, but (a) the differences are minor and (b) if one’s goal is just to read Greek (not do textual criticism), whether or not one has Nestle-Aland is not hugely important. Besides that, there are possibly places where the NIV translators have made a better textual choice than the NA folks! (We’ll find out when we get to see all the original “autographs” in heaven, I suppose.)

There is also a 146-page Greek to English dictionary included at the back (Mounce Concise) which has word frequency information, a short gloss/definition, and verse references where words are used. It’s basic, but a good dictionary, especially for quick look-ups when doing daily reading.

As for the English version employed, this is the 2011 NIV, the update to both the 1984 NIV (New International Version) and the 2001/2005 TNIV (Today’s New International Version). Much ink (and many bytes) have been spilled over the differences between these three and the controversy surrounding the TNIV. (Much ado about not-much, in my opinion.) The TNIV opted to be more gender-inclusive than the 1984 NIV in how it translated masculine Greek words, so “brothers” would be “brothers and sisters.” If Paul clearly has men and women in view (he often does), “brothers and sisters” is the best way to translate the masculine Greek noun. But this gender inclusivity (I prefer “gender accuracy”) displeased some, and so now the TNIV is off the shelf (as is the old NIV) with the NIV (2011) in its stead.

The 2011 NIV seems to either lean more toward the TNIV or to split the difference on gender. For example, take Galatians 1:11 in the three versions:

Here are Galatians 1:1-2. Note how the new NIV matches neither of its predecessors.

Rodney Decker has a thorough (and I mean thorough) review of the new NIV here.

Although I never had the pleasure of seeing a TNIV-Greek diglot (I don’t think Zondervan published one?), this one is the next best thing. Especially for preachers and students and Greek-learners who want to stay close to the NIV, this diglot is yet another great language resource from Zondervan.

Thanks to Zondervan for the review copy. See a sample file here (pdf). You can find purchasing information about the book at Amazon or at its Zondervan product page.