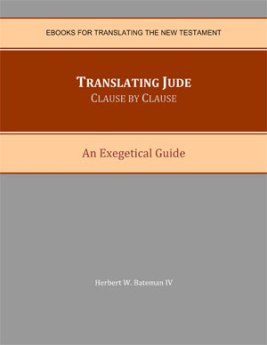 It’s been fun to watch the Baylor Handbook series progress, with volumes on both the Hebrew Text and the Greek Text. Not only do we who are currently engaged in Hebrew and Greek reading have amazing technological tools at our fingertips, but there are also series like Baylor’s that focus specifically on the original languages.

Herbert W. Bateman IV inaugurates a new series of his own, via his Cyber-Center for Biblical Studies, with Translating Jude Clause by Clause: An Exegetical Guide. More volumes of these EBooks for Translating the New Testament have been projected to release in 2014 and 2015.

Jude is a difficult book. It receives far less teaching and preaching attention than most New Testament books. It has clear references to “apocryphal” literature, about which Protestants, in discussions on canonicity, seem to feel compelled to say, “Jude is not citing such as Scripture.”

And the Greek is tough. Paul’s letters are easier! In Jude’s 25 verses, there are more than a dozen hapax legomena (words that occur only once in a body of literature, here understood as the New Testament). Because words are best defined by their context and usage, this doesn’t give the student of the New Testament much to go by for understanding these words.

So a guide to Jude’s Greek text is welcomed by anyone who wants to work through that book. In this post I review Bateman’s Translating Jude. I was eager to receive and work my way through the book, since I found Bateman’s Charts on the Book of Hebrews to be “a top-notch resource for an important biblical book.”

What Is Translating Jude Clause by Clause?

There are three primary sections in Translating Jude Clause by Clause:

1. Introduction. Bateman’s first section packs a punch. After I reading it I felt very well set up to begin working my way through Jude’s Greek. In the introduction Bateman explains the layout of his uniquely structured book, includes a substantive section on independent clauses (of three types) vs. dependent clauses (of four types), and suggests “Tips for Translating Jude.” That last section explores some unique characteristics of Jude’s style, such as his frequent use of participles, long sentences, and parallel constructions (among other features).

2. Clausal Outlines for Translation. Here is where the reader will do the work of translating Jude. Bateman understands Jude as consisting of five main sections (vv. 1-2, vv. 3-4, vv. 5-16, vv. 17-23, and vv. 24-25), which is then further broken down into nine total passages, according to which Translating Jude is set up.

In addition to the robust introduction to Jude, each section of the clausal outlines begins with Contextual Orientation to the passage, which I found to be the most consistently excellent part of Bateman’s work. It is “a summary statement based on Jude’s flow of thought in order to provide some contextual orientation to the Greek paragraph to be translated.” It delivers each time.

After that there is the Greek Text for Verbal Recognition, where Bateman reprints the Greek text of Jude so that readers can mark it up to identify the various verbs and verbal forms.

Then there is the Clausal Outline for Translating Jude. Here Bateman spaces out and appropriately indents the various clauses in a passage so that the reader can visualize the flow of Jude’s thought. There’s plenty of space to write in one’s own translation, too. Here is a screenshot from the sample pdf of the interactive edition (i.e., you can fill in the blanks by typing). 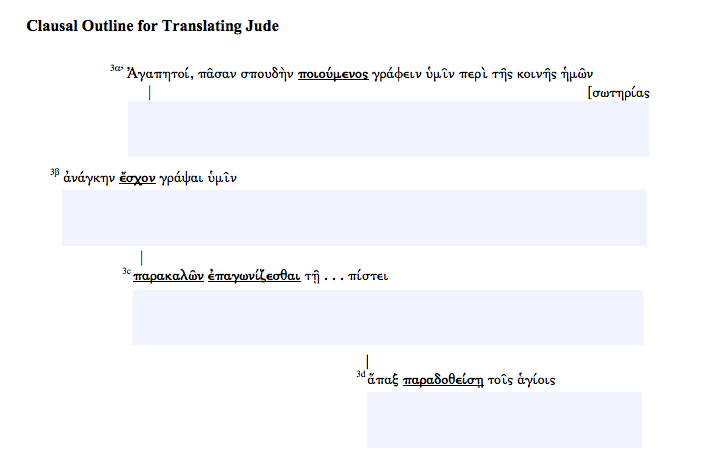 3. Clausal Outlines Translated and Syntax Explained. The final section serves as a sort of answer key for the section above. Bateman shows the clausal structure of Jude again (with indentations), this time with his English translation below the Greek. His “Syntax Explained” offers explanation along the lines of “grammatical function, syntactical function, and semantical function.” Bateman often cites and points to other Greek grammars, which helps enable further study.

What I Found Helpful

The book is highly interactive throughout. Even in a static, print book, I often had the feeling that I was being coached through Jude by an experienced and knowledgeable Greek professor. For those who haven’t used clausal outlining, I recommend it! Bateman walks the reader through the method well.

I especially appreciated how much the third section went from grammatical observation to exegetical insight. For example, Bateman notes the use of a constative aorist in Jude 11. He concludes:

Jude alludes to the behavior of the godless as a whole or in a summary fashion. Thus the godless have made their bed and currently lie in it.

The introduction offered far more than I expected from a book of this length. In addition to the insights noted above, Bateman includes a number of grammatical summary charts in the introduction that I found myself referring to often as I worked my way through Jude.

What I Found Not as Helpful

The user of Translating Jude will have to overlook an unexpectedly large number of misprints and typos, as well as a couple of Greek errors. I found this to be a major distraction that detracted from what is otherwise a good book. Fortunately, I understand that future printings will include corrections. (And the electronic version of Translating Jude will be easy to correct and update.)

By about verse 8 or so of the “Syntax Explained” section, I started to experience the format of the translation notes as repetitive. Perhaps their predictability serves a value–e.g., a Greek verb receives a parsing, its lexical form is noted, there is a brief BDAG gloss, and then there are sentences beginning with, “Syntactically,” “Semantically,” and, “Thus,” each in turn. But something that felt a little less boilerplate would have been more engaging, at least to me personally. Others may not find it an issue.

Finally, simply because it seemed remarkable to me, I was surprised at Bateman’s proposal for understanding the “fault finders” and “grumblers” of verse 16: “two words that might be summed up into one: bitching. They bitch regularly.” It could be just my own sensitivities, but I think that word has enough potentially derogatory connotations (surely unintended here) that leaving it out of a commentary and suggesting another English word would have been better. I otherwise appreciated the English translations.

Of course one wants to know how Translating Jude compares to the Baylor Handbook on the Greek Text series, especially since Baylor has a volume by Peter H. Davids on II Peter and Jude (review forthcoming!). Davids does not aim to do what Bateman does in terms of clausal outlining and written-out reader translations–Bateman is more interactive in that sense. Davids is more thorough when it comes to explaining the Greek text. Bateman does note that his translation notes focus on verbs and verbals, but Davids has more detail overall, even in defining and explaining the usage of various verbs.

Bateman writes that Translating Jude “is not a commentary. It is a tool designed to help translate and visualize Jude’s train of thought.” With its emphasis on clausal outlines–and with how clearly they are presented and explained–the book succeeds in its aim.

Apart from my (hopefully constructive) criticisms noted in the section above, I’d recommend this book to students of Greek, especially any who have become over-reliant on using Bible software for parsing and translating. Anyone whose Greek or grammar is rusty will also benefit from the clear introduction to Translating Jude and its verse-by-verse explanations.

Thanks to the Cyber-Center for Biblical Studies for the review copy. Prof. Bateman’s other books are here. You can find Translating Jude Clause by Clause at Amazon here (affiliate link). A sample pdf of the book is here.

One thought on “Translating Jude Clause by Clause”