Hallelujah! I just found Jesus
Swimming at the bottom
Of the bottle I keep crawling out of
He said, “You look familiar, but I can’t place your face”
I said, “You look like hell” and that we used to hang
At my mother’s request

On the one hand, it’s a post-Catholic-upbringing, anti-religious declaration of sorts.

Have I been saved?
Cause I feel the same:
Dirty and tired

Can I be saved?
Without having changed
Or remorse for what I don’t believe?

On the other hand, I can see an honest Christian praying those words. He prays on:

I offer up my humble soul
And my broken spirit
All those things that I can’t control
The intangible bullshit
To you, my Lord

I know he’s being sarcastic (right?), but it’s hard not to hold out hope that one of my all-time favorite artists would really mean words like that, words which sound like David or Paul, and which capture the essence of some of my own prayers.

The rest of the song seems to clarify, however:

I think that last line–“so don’t try to sell me yours”–is the song’s interpretive key. The prayers were just at his “mother’s request,” and didn’t really work if he’s still feeling “the same: dirty and tired.” The prayer to “you, my Lord” is in scare quotes.

Whatever he meant, the song, “I Believe” is one of my favorite Owen tracks out of his 9 full-length albums and handful of EPs in the last 15 years. 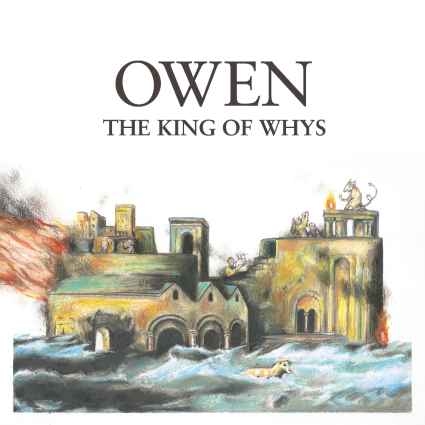 Five years later the first track on the just-released King of Whys is “Empty Bottle.” The song presumably refers to the Chicago concert venue with that name (“Empty Bottle / crowded goth show”). But the connection to “I Believe” is inescapable, as it borrow’s the older song’s melody from the line “Hallelujah! I just found Jesus!” I would have thought this move subconscious were it not also for the similarly of the “empty bottle” to “the bottom of the bottle” in “I Believe.”

Now Owen has found the transcendence he was looking for, it seems, in interpersonal connection:

You’ve got a lot of nerves
Will you please touch mine with yours?

This is, after all, the album of a man now married and with kids.

“Empty Bottle” is as close as an acoustic guitar will get you to headbanging. By the end of the track, the album is already set to be as lush, intricate, and ethereal as anything Owen has done.

What a mess
Past and present stitched together, perilously tethered I ain’t fooling anyone (least of all me)

He continues with his signature combination of the clever and the mildly profane:

His next line–“This is a test and I’m failing”–seems like an antiphon to Pedro the Lion’s “If this is only a test, I hope that I’m passing.” The music is sweet and textured.

Owen is “Settled Down” now, which he explores in a track with more interlocking and arpeggiated guitars, accompanied with some sweet kick drum work. As this song concluded, on my first listen, I knew this album was among his best work. (Multiple listens through have confirmed the assessment.)

And then “Lovers Come and Go,” came on. I felt how I did the first time I listened to Owen’s 2001 self-titled debut. I don’t know if it’s the strings or the electric guitar overlays or the subtle but steady bass and drums, but it’s the kind of euphoric high that has kept me bobbing my head to emo well into my mid- to late-30s. Maybe I should have grown out of it by now, but songs like this only encourage me.

“Tourniquet” sounds at first like the kind of overly effusive, heart-on-the-sleeve, lyrical navel-gazing that got/gets me made fun of for listening to this kind of music: “This tourniquet hasn’t stopped the bleeding yet.”

But give him a chance:

Then there is the entrance of the horn parts. Over the song’s gorgeous layers, Owen sings:

…suggest that the song really is about marriage and fear of one’s self in the context of a long-term commitment. Melodramatic? Possibly. More vulnerable than many songwriters? Definitely.

Owen’s back catalogue is full of not-exactly-pro-feminist references to women. Owen is not Mark Kozelek-level misogynistic, but at least the persona of some of his songs veers towards womanizing territory. Too many to list here, but songs like “Poor Souls” (from his 2002 No Good for No One Now) have likely made listeners wonder what songwriting on the other side of marriage would be like. “Tourniquet” offers a glimpse.

Whatever else one could think about it, Owen is raw in articulating the wayward human condition, and how even marriage does not quell a wandering heart. (It might take finding Jesus to do that.) “Tourniquet” called to mind one of CCM’s most striking numbers: Amy Grant’s “Faithless Heart” of 1988, a song that caught her much flack from an unforgiving (and often disingenuous) Christian music industry. Like Grant’s confession, “Tourniquet” is a tough song to listen to but an important one.

“Burning Soul” represents a years-later take on an alcoholic father: “He wasn’t a saint, but he wasn’t a bad man.” Like his father before him, Owen sings,

Now I’ve got a burning soul
What now?
Both ends of my prayer candle are burned out

“Sleep Is a Myth,” the second-to-last track, starts out fatalistic:

Is this how you say, “Mon coeur bat la chamade?”
Which pills did I take?
Were those bills ever paid?

Sleep is a myth
Believed but never witnessed by me

The spider bites are back
The eggs have finally hatched

But as the song progresses (and as the layers of vocals start to build), hope comes to the fore:

Then the song moves into a nice, long, instrumental groove. The distorted drums and almost-shoegazing lead guitar line and choral vocals are a new sweet spot for Owen and company.

The album’s final track, “Lost,” is also its first single.

Kinsella sings to “the last of [his] feral friends.” Could the “friend” be his former self? Subtle allusions to previous Owen lyrics make it possible.

The album closes on an odd note:

You may be wandering driveway to driveway drunk
A ghost without a house to haunt
The last of my feral friends, I know you’re lonely
but don’t waste your breath telling me that you want what I have
No one believes you

If this song is autobiographical (today’s Kinsella singing to yesterday’s Kinsella: “I see you but you can’t see me”), it’s a dour note to end on. Is he saying he really didn’t want the settled life? If he’s singing to a friend, there is the faintest hint of affirmation of the “settled down” lifestyle the artist has chosen (“you want what I have”), even while he knows “no one believes” his friend.

Musically the song never resolves to the tonic, so maybe the cliffhanger effect is on purpose.

After the strength of the first six tracks, I was hoping for something more final and summative at the end of the album, but maybe tension is how it has to end for Owen.

The horns and string and pedal steel on the album will leave you wanting that instrumentation on many Owen songs to come. His songwriting is as good as ever. And King of Whys is hands-down the best-produced Owen album to date.

Owen’s 2001 full-length record–his first–is still the benchmark against which I measure all of his albums. More than any other effort to date, King of Whys evokes the beauty of that first record. It’s a pleasure to listen to, and probably his most consistently good one since his debut. I’m already eager to hear where he’ll go next.

Thanks to the musical powers-that-be, who sent me an early download of the album so I could review it.