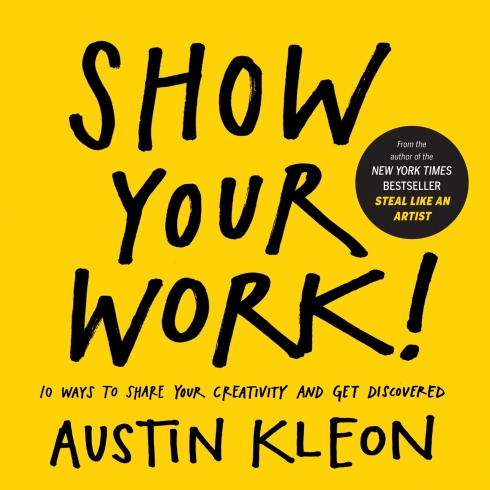 Since starting Words on the Word four years ago, I’ve spent far more of my blogging energies on writing and reviewing books and apps than on marketing what I do.

I’m fine with the focus as it’s been, but I know I could stand to explore more ways to “get discovered,” as Austin Kleon promises to address in his Show Your Work! 10 Ways to Share Your Creativity and Get Discovered.

I heard about Austin Kleon from Shawn Blanc. By telling you that, by the way, I’m following some of Kleon’s advice:

It’s always good practice to give a shout-out to the people who’ve helped you stumble onto good work and also leave a bread-crumb trail that people you’re sharing with can follow back to the sources of your inspiration.

Kleon’s got his own site which is worth checking out. Sitting down to write this review was the first time I’d been on it, and I’ve already got 15 tabs open that I’ll either read later or save to Evernote. A highlight: in his post on how to read more, suggestion #1 is “Throw your phone in the ocean.” Great idea. Not to mention this amazing wallpaper for your phone, to keep you off it.

4. Open up your cabinet of curiosities.

Chapter six, “Teach what you know,” is the shortest (barely 700 words) but best chapter.

I didn’t care a whole lot for the graphics (on every other page or so), but they do make the book easier to fly through, and a few of them illustrated the points creatively. The first one is compelling: 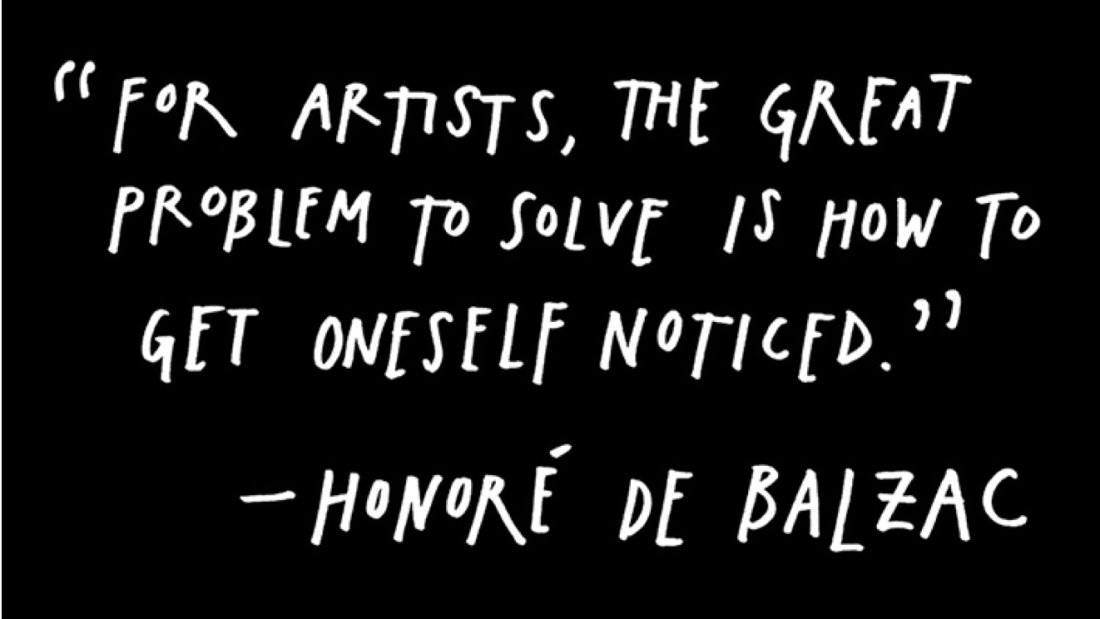 Some others are interesting: 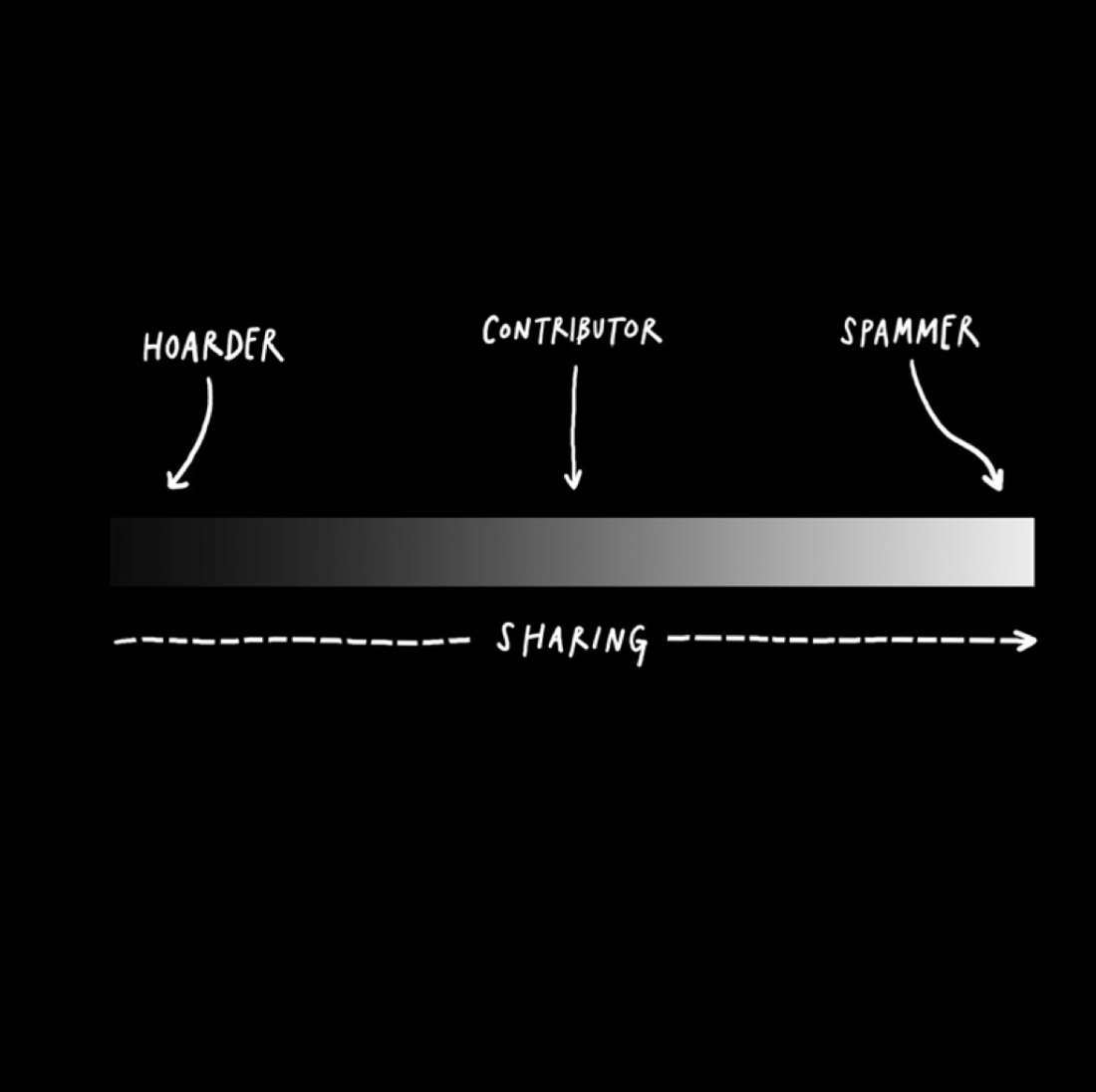 And there are some real gems in this book, whether they are Kleon’s or others’ words:

When Radiohead frontman Thom Yorke was asked what he thought his greatest strength was, he answered, “That I don’t know what I’m doing.” Like one of his heroes, Tom Waits, whenever Yorke feels like his songwriting is getting too comfortable or stale, he’ll pick up an instrument he doesn’t know how to play and try to write with it. This is yet another trait of amateurs— they’ll use whatever tools they can get their hands on to try to get their ideas into the world.

“The stupidest possible creative act is still a creative act,” writes Clay Shirky in his book Cognitive Surplus. “On the spectrum of creative work, the difference between the mediocre and the good is vast. Mediocrity is, however, still on the spectrum; you can move from mediocre to good in increments. The real gap is between doing nothing and doing something.” Amateurs know that contributing something is better than contributing nothing.

Much of the book can be summed up by this sage advice:

The best way to get started on the path to sharing your work is to think about what you want to learn, and make a commitment to learning it in front of others.

Kleon encourages writers and artists to “become a documentarian of what you do.” That can be a “daily dispatch” (think: email newsletter) or a behind-the-scenes video on how you do what you do. Kleon says:

Once a day, after you’ve done your day’s work, go back to your documentation and find one little piece of your process that you can share.

Kleon encourages those who quote or borrow to cite, but he falls short of a robust understanding of what plagiarism is and isn’t.

If you have a weird hybrid job, say something like, “I’m a writer who draws.” (I stole that bio from the cartoonist Saul Steinberg.)

A nice citation, but unfortunately “I’m a writer who draws” appears uncited in his book jacket bio, on his Website, on his Instagram, etc.

He shows his work on the books he reads (great idea), but then appears to copy-paste in publisher’s descriptions without citing them.

No need to lambast the guy—but I already didn’t like the title Steal Like an Artist (his first book), let alone the concept. I get it’s supposed to be a pithy way to say, “Let others influence you.” (Just like “content creation” means “writing.”) But the lack of nuance around what I consider an important issue in art creation bugged me.

Show Your Work! is more than 200 pages, but could just as well have been a series of 10 short (albeit good) blog posts. It’s got even fewer words per page than a Rob Bell book! (All due respect to Rev. Bell….)

More to the point than a low word-to-page ratio is that there are plenty of pieces of advice Kleon offers that lack specifics. For example, in his section on getting a good domain name, he says:

Buy http://www.[ insert your name here].com. If your name is common, or you don’t like your name, come up with a pseudonym or an alias, and register that. Then buy some web hosting and build a website. (These things sound technical, but they’re really not— a few Google searches and some books from the library will show you the way.)

Because this is a print book, you don’t even get the benefit of a hyperlink to start you in the right direction.

But there are other parts where in even a few words Kleon fleshes out his ideas, as in the section, “Turn your flow into stock.”

Even with its flaws, this book was well worth the time I spent reading and marking it up. The book gave me some good, specific action steps to pursue, in the hopes of spreading the word about the work I’m doing on this blog (and elsewhere). And it’s given me months and months of sermon illustrations, inspiring quotes, and writing prompts.

For its reasonable price, the book is worth the purchase, though this might be better checked out from the library first. One way or the other, I found the book overall to be encouraging, inspiring, and motivating.

Check it out via Amazon or the publisher’s page.

Thanks to the good folks at Workman for sending the review copy.