A couple of Advents ago I preached on Jonah. There is no lack of good resources on the book, even ones that treat the Hebrew text itself. But the Baylor handbook offers a somewhat unique perspective, analyzing the words and phrases of the Hebrew text, as well as reading it through a discourse analysis lens:

This approach begins by observing that within Biblical Hebrew texts a number of types or “discourses” can be identified. Each type has a particular function that is readily evident. Narrative discourse relates the events of a story (Gen 8). Predictive discourse speaks of an event in advance of its occurrence (I Sam 10:2s7). Hortatory discourse is meant to exhort someone to act in a particular manner (Job 2:9). Procedural discourse tells someone either how to do something or how something was done (Gen 27:1-4). And expository/descriptive discourse is meant to explain something or make a statement (2 Sam 12:7). (3)

The Jonah handbook is short and compact. The formatting is easy to follow. First there is an English translation, passage-by-passage. Then the Hebrew text is reprinted verse-by-verse (making this an all-in-one-place reading aid). After that is “an analysis of that clause as a whole, with comments related to the function of the clause, its discourse type, and related syntactic matters” (9). Finally, there are word-by-word or phrase-by-phrase comments.

Overall, I appreciated the handbook: I read it cover to cover. The grammatical comments are helpful at multiple turns. For example, here is the text of Jonah 3:8

A qatal in a dependent clause provides background information in the relative past (i.e., past in comparison to the mainline). This is often expressed in translation through the use of a pluperfect (Longacre, 82).

These two paragraphs from Jonah 1:5 give a good sense of the depth and utility of the comments: 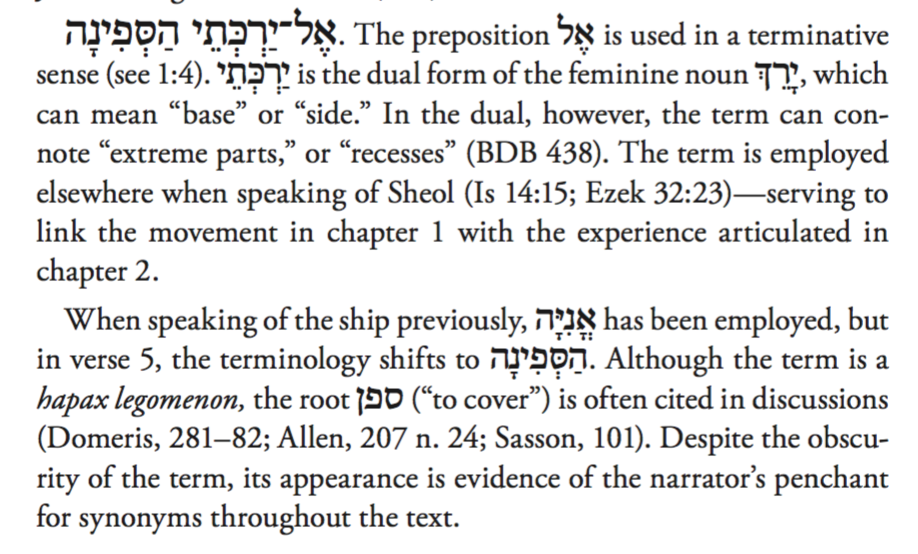 The target audience is the student who is “making the move from introductory grammar to biblical text” (1). Given that, a surprising number of terms (irrealis, factitive, prosopopeia, diegetic, and more) go unlisted in the 28-term Glossary. And the discourse analysis is too much at times, as in this difficult paragraph:

Typically in narrative discourse, the negation of any verb is understood as irrealis scene setting and appears at the lowest level on the discourse profile scheme. The negation of a verb stops the forward progress of the narrative by indicating what is not the case. Longacre, however, has suggested that in certain contexts a negation may be termed a “momentous negation” because it is critical in advancing the narrative line forward (82). In these rare occurrences, the verb form is understood as a second-rank construction (similar to the X + qatal), in effect actually serving to move the narrative along. The events and dialog in chapter 4 are predicated, in part, on the momentous negation that occurs at the end of 3:10. The object of the verb is absent due to ellipsis.

Typos in the book are surprisingly frequent, especially occurring in the English translations. The book sets out to provide lexical forms for every verb in Jonah but omits them in a number of instances, leaving the reader without needed help at times. And the Malachi handbook has a “word chart” which I have hoped to see in other volumes, but haven’t. (Baylor published the Malachi volume after Jonah.)

On the plus side, Tucker commented more than I expected on the style of the author of Jonah—this helped me better understand the Hebrew in context. And there are more comments with exegetical and even preaching payoff than one might expect from a series that the editors intend to serve as a sort of prequel to a commentary.

If you’re reading through Jonah in Hebrew, will you want this handbook? Despite what I see as some shortcomings, yes. The best commentary on Jonah is probably this one, which covers Hebrew well, but in its transliterated form. So if you’re going to go deep with the Hebrew of Jonah, Tucker’s handbook is a nice companion—and much of his discourse analysis is clear, even if the reader needs to reference his introductory comments (and external sources) a few times along the way.

The handbook is available through Amazon (here) and the publisher (here).

Thanks to Baylor University Press for the review copy—sent to me with no expectation as to my reivew’s content.

One thought on “Jonah: Baylor Handbook on the Hebrew Text”