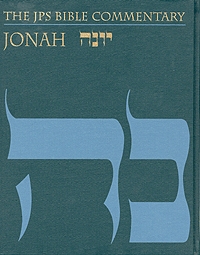 Nahum Sarna’s JPS Torah Commentary on Genesis is easily one of the best three commentaries I’ve read on any book of the Bible. I’d put it up there with R.T. France’s Mark commentary, a technical and detailed commentary of which I read every word–France is that good, and so is Sarna.

So as I geared up to preach on Jonah during Advent (see some of the results of that unlikely pairing here), I wanted the JPS Bible Commentary in hand. It’s by Uriel Simon, professor emeritus at Bar Ilan University in Israel, where he also directed the school’s Institute for the History of Jewish Research. Dr. Simon aims for a similar approach to the one that made me appreciate Sarna’s Genesis commentary so much. In the Preface Simon writes:

The present commentary has been written under the sign of a dual commitment: academic rigor, which aims at uncovering the original meaning of the Book of Jonah; and a Jewish commitment to Scripture as the taproot of our national existence and wellspring of our religious life.

The commentary is not very long. The Preface and thorough Introduction make up 38 pages. The commentary itself has 46 pages, followed by a four-page bibliography. Each page in the commentary includes the Hebrew text, an author-modified version of the New JPS translation, and Simon’s comment on passages, verses, and individual words and phrases.

The Introduction begins with a treatment of the book’s theme(s), as well as its history of interpretation. Simon realizes that he “stands on the shoulders of his predecessors,” and gives the reader a nice lay of the land of Jewish/rabinnical exegesis up to the current day. (You can read a good summary version of Simon’s treatments of potential themes in Jonah here.)

I disagree with Simon’s dismissal of “Universalism versus Particularism” as a possible uniting theme for Jonah. He does not think Jonah symbolizes Israel, “and Nineveh does not symbolize the gentile world.” Of course, it is my being a Christian (as Simon would expect) that contributes to this read, but neither did I think Simon’s case against the gentiles as anything more than just “supporting characters” was compelling. I don’t think Jonah has to symbolize Israel–and the book doesn’t even have to be an indictment against God’s chosen–for the text to still have “panhumanist connotations” of the extension of God’s mercy to all people (even vile oppressors of the innocent!).

I do find the author compelling, though, when he speaks of the “Compassion: Justice versus Mercy” motif as one that is “compatible with the entire narrative from beginning to end and encompasses most of its elements.” Simon explains:

Jonah foresaw both the submission of the evildoers of Nineveh, terrified by their impending destruction, and the acceptance of their repentance by the merciful God; but he was totally wrong to believe that he would be allowed to escape to Tarshish. Subsequent surprises undermine his pretense to knowledge‑-the fish that saves him from death but imprisons him in its belly until he gives up his flight and begins to pray; and the plant that saves him from his distress but vanishes as suddenly as it appeared, so that he can feel the pain of loss and open his heart to understand the Creator’s love for His creatures. Only when the proponent of strict justice realizes his own humanity can he understand the fundamental dependence of mortals on human and divine mercy.

The Introduction also treats Jonah’s place in the canon, its literary genre and features, structure (it’s got “seven scenes”), style, links to other biblical books, vocabulary, date of writing, textual history (there is an “excellent state of preservation of the text”), and a section on the unity of the book and its prayer/psalm in Jonah 2. I’m not totally opposed (in theory) to Simon’s idea that the prayer of that chapter was a later addition, but its absence of “confession and an appeal for forgiveness” don’t have to make it an interpolation–it could just point more to the character of Jonah, in all its complexities and with all his foibles.

Regarding the historicity of Jonah and the large fish (which is “really external to the [meaning of the] story” itself), Simon has a great insight:

The repentance of the Ninevites, from a psychological standpoint, is less plausible than the physical possibility of the miracles that happened to Jonah. There is nothing like it anywhere else in the Bible. What is more, their repentance, unlike miracles, cannot be ascribed to divine intervention, because it is emphatically described as a human action (3:10).

The questions that arise as one reads the text (reprinted in the commentary in Hebrew and English) so often seem to be the ones that Simon answers. Regarding “Nineveh, that great city” in Jonah 1:2, Simon gives historical background, but only insofar as it serves Jonah’s literary purposes:

Nineveh’s size is mentioned, not to emphasize the difficulty of the task, but to highlight its importance–as is the size of the city, so is the magnitude of its wickedness….

The reader, in other words, will find just about anything needed to profitably make her or his way through Jonah.

Like Sarna does for Genesis, Simon goes in depth with Hebrew word meanings in a way that even a non-Hebrew reader will (usually) be able to understand. For example, when the king of Nineveh calls that city to repentance in Jonah 3:7, Simon comments:

In the hif’il (causative), z-‘-q generally means “call to an assembly, muster” (e.g., Judg 4:10; 2 Sam 20:5). Here, though, it means to “proclaim or spread a message”…. The narrator probably selected this verb to reinforce the formal linkage with what took place on the ship–in view of the danger of foundering the sailors cried out to their gods (1:5), while the king of Nineveh had the criers (cf. Dan 3:4) cry out the message of repentance for his subjects to hear.

There’s more in this well-written and carefully-prepared commentary that deserves further engagement, but this review is already long enough. Don’t be fooled by the commentary’s low page count–its stated 52 pages do not include the nearly 40-page introduction. That may still feel short for a commentary on four chapters of Scripture, but it’s as substantive as most readers will need. If you’re working your way through Jonah, Simon’s JPS commentary is one of three or four you should make sure to use.

Many thanks to the folks at University of Nebraska Press/Jewish Publication Society for sending me the copy of the Jonah commentary for review. The book’s JPS product page is here; you can order it through Nebraska Press here. Find it on Amazon here.

5 thoughts on “The JPS Bible Commentary on Jonah”