Sure, there’s a chance that over-reliance on a monetized chore chart can have negative effects on children. But we parents also want to teach our kids about the importance of work, responsibility, and the basics of financial management.

There’s still not an iPhone app for making you a better parent. In fact, probably less time on apps in general makes better parents. However, a number of us moms and dads already spend time each day managing tasks, finances, and other activities on a phone… so why not a chore chart? 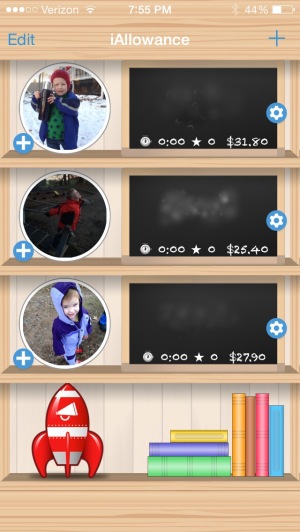 Those are my sweet kids (names blurred out–you see their names on the app).

They’ve got their own corner of the app where we track their stars (earned or docked for behavior) and money (allowance, and stars converted to money).

The app has a bunch of pre-set chores you can select to track for each kid–at a frequency of your choosing.

And you can add your own. (We added, “Make the bus on time”–everyone gets a star when that happens!) 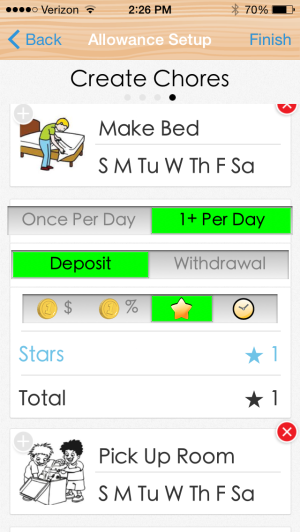 You can set how many stars equate to a monetary amount, and then have the app make the transfer for you. We were paying our kids 10 cents a star, but we were doling out a lot of money! So we changed it to 5 cents a star.

You can also set up different accounts for each child. We have one for Church, one for Savings, and one for Spending. The Totals screen shows you all that, as well as Stars and Time (one of the few features I haven’t used in the app): 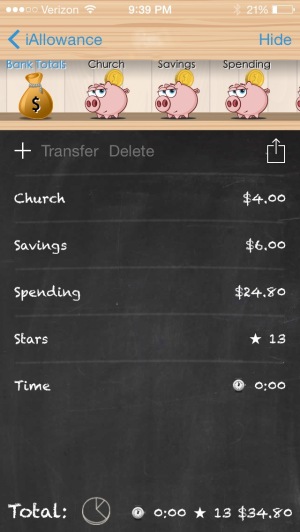 iAllowance is a really a great (and fun) app. It syncs via Dropbox or iCloud with an iPad. As a universal app, if you buy it, you can use it (and sync it) on any iOS device.

The kids love it, too. It’s been an effective motivator, and really fun for them to tap their stars at the end of the day–or tap on “Bad Behavior” and see a frowny face. 😦

Any time you tap next to a chore (which you can do in the Day view or Week view) you get an accompanying sound effect, too. And the allowance deposits happen automatically, in the amounts and to the accounts that you specify.

I can’t say whether a incentive-based program will work for you and–if it will–whether you should run it from a mobile device. But I can say that both the overall setup of stars and allowance, as well as this particular app, have really helped perk up some listening ears around here!

Now… I’ve got to go give myself a star for posting another Apptastic Tuesday review, Blizzard 2015 notwithstanding.

Thanks to the developer of iAllowance for giving me a download for the review. Check out the app’s site here. You can find the full (paid) version here, and try the free version here.