Last week I posted some initial impressions of the just-released Logos 5. Having had a little more time with it now, here are some further impressions I have.

The Data Sets guide the user through resources nicely and can do some unique things.

The Logos 5 Data Sets are what most stand out to me on further use. Two in particular to note:

Bible Facts (People): this allows me to search by a referent and not just by the actual wording in the text. For example, by going to “Tools” from the home screen, then “Bible Facts,” I can type in “Jesus” to see not just where that word occurs in the text, but also where the text is referring to Jesus, whether by “he,” as “Christ,” “Son,” and so on. It’s a lovely and very impressive feature. Take a look, and click on the image to see larger: 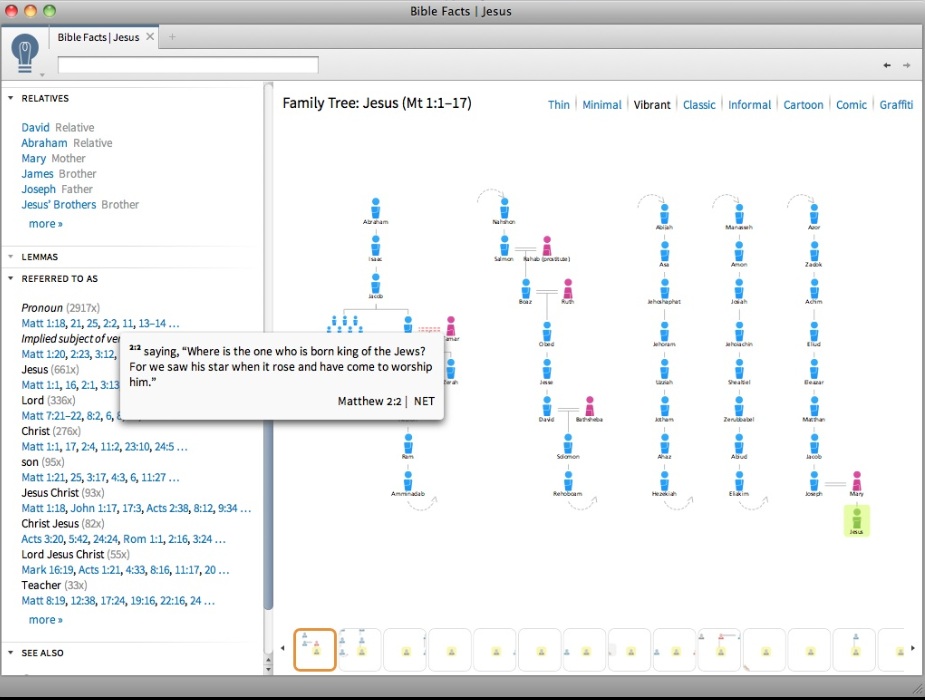 Clause Search: Another you-have-to-use-it-to-believe-it feature. Here I can find (in less than a second) every time Paul is the subject of a clause, whether “Paul” occurs in the text or not. This means I can search on Paul in Acts, but also on the things Paul says about himself (using just “I” in the text) in his epistles. Or, I can search at the clause level for times when Jesus is the subject and his disciples are the object. As here: 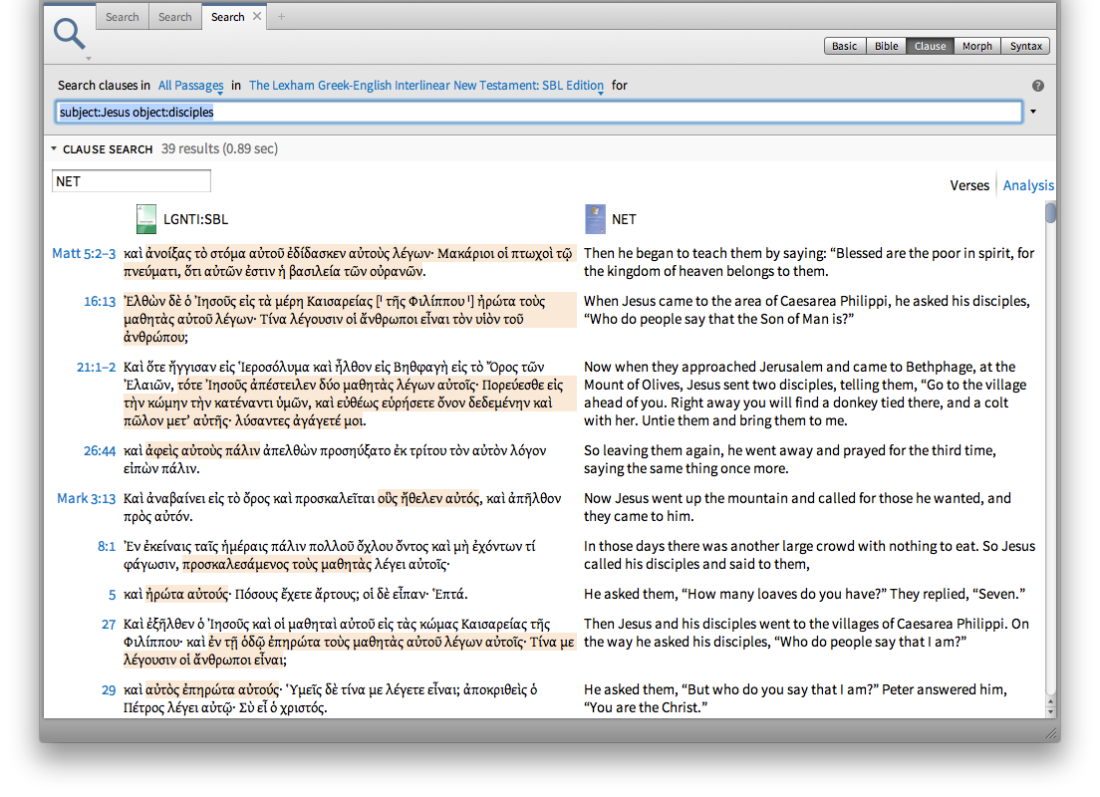 Note that the first result is Matthew 5:2-3, where the words “Jesus” and “disciples” don’t even appear in the text (!) but the “he” refers to “Jesus” and “them” to his disciples. Of course, there is some interpretation at play here in the results. The disciples are the closest referent to “them” in the text, but Matthew 5:1 also mentions the crowds, who could also be what “them” refers back to. But the fact that the Clause Search can, in under a second, return these kinds of results is astounding. It’s searches like this that are why Logos markets itself as “powerful.”

The search speed of the program has improved (though is still not the fastest on the market).

Logos 5 is an overall faster program than Logos 4. (I use Logos primarily on a Mac.) The clause searches I’ve done, for example, have been lightning fast. But Logos is still not quite as fast at returning results for original language word searches as BibleWorks or Accordance. I wondered with Logos 4 whether this might be because Logos has a large library of resources. Whatever the reason, the multi-second waits for search results to come up are less common in 5 than in 4. Most of my searches have been showing results in a second or less, even the clause searches that I’d expect to take longer. Accordance and BibleWorks, however, give near instantaneous search results. Logos, with v. 5, is at last in the same ballpark with regard to speed.

The contents of the base packages have changed significantly.

This does not affect previous Logos users necessarily, in that you always keep your Logos resources with you (for life). So if you upgrade to Logos 5 via a new base package, anything you had bought previously stays with you, even if it’s not in the new base package. For someone like me who primarily uses Bible software to study biblical languages, the Original Languages Library in Logos 4 was great (except, perhaps, for its lack of an English translation of the Septuagint). Even with its retail price under $500, that package still included the full 10-volume Theological Dictionary of the New Testament (TDNT), making it a good deal, and a great deal with the academic discount.

Now to have TDNT in a base package (if you don’t already own it), you have to buy the “Gold” package at a retail price of just over $1,500. The Silver package in Logos 5, that I received to review, includes the entire New American Commentary set, the full Pulpit Commentary set, the Lexham Analytical Lexicon to the Septuagint (and the same to the Greek NT), several Greek and English Apostolic Fathers texts, the Theological Lexicon of the OT (and that of the NT), as well as many more resources for a retail price of about $1,000. I was particularly excited to see a new English translation of the Septuagint, coming from the Lexham suite by Logos. Users will simply have to weigh whether the included resources in a package justify its cost. The Silver package seems to be worth the price. (Though note that the fairly standard Rahlfs Septuagint text is not included in Silver; Swete’s text is.)

This video from Logos gives a good overview of what’s new in Logos 5, with special focus on the Data Sets:

See also my initial impressions of Logos 5 in an earlier review.

Thanks to Logos for the review copy of Logos 5 with the Silver package, provided to me simply with the expectation that I offer my honest impressions of the program.