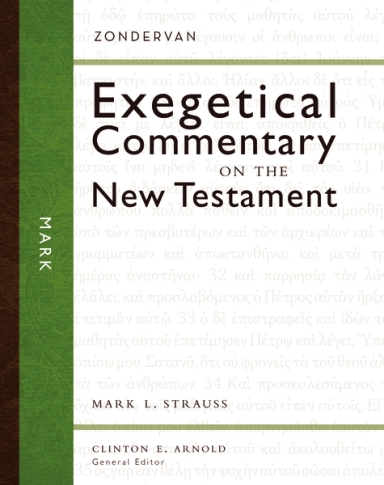 I really dig Zondervan’s Exegetical Commentary on the New Testament, as you can see by the multiple volumes I’ve reviewed here. The series continues production, with 10 volumes now available. Recent additions are Karen H. Jobes’s 1, 2, and 3 John and Mark L. Strauss’s Mark.

Here’s how the series is laid out:

As I’ve said before: This sounds like a lot, but the result is not a cluttered commentary. Rather, as one gets accustomed to the series format, it becomes easy to quickly find specific information about a passage. The section headings are in large, bold font.

Here’s Strauss on Jesus in Mark 3, who asks, “Who are my brothers and mother?”

At one point, [Jesus] refused to see his family, saying that his true mother and brothers were those who did God’s will (Mark 3:31–35, par.). Jesus is not repudiating his family but rather is affirming deeper spiritual bonds. It is not surprising that the early believers referred to each other as “brothers and sisters” (adelphoi). As Jewish followers of Jesus were increasingly expelled from the synagogues and Jewish families were divided, this emphasis on spiritual kinship became extremely important.

In the context of the Beelzebub controversy, the point is clear: kinship in the kingdom of God is based not on ethnic identity or family background but on a relationship with God through Jesus.

I’m following the lectionary through parts of early Mark right now, and though there are already a host of great commentaries on book (not the least of which is this gem), Strauss’s volume has been a welcome addition to my sermon preparation process!

Find the book here at Zondervan’s product page or here on Amazon.