First things first–who is even doing design for Cultured Code’s app Things? Because that design team is the best in the biz. The two images in this post show as much.

Yesterday Cultured Code announced a significant improvement to how Things syncs data across devices. Once again, they’re ahead of the pack in this regard. From their blog announcement:

Shortly after Things Cloud launched, we released a feature called Local Push. It makes sync instantaneous as long as Things is open on your devices (and they’re on the same local network). But of course the app is often closed on your mobile device—so it won’t receive the push, and won’t be in sync until you manually launch the app later.

Today’s new version of Things Cloud solves this problem by sending your devices a push from the cloud (regardless of what network they’re connected to). This means that most of the time you’re in sync even before you launch the app.

And then they give you this sweet visual representation: 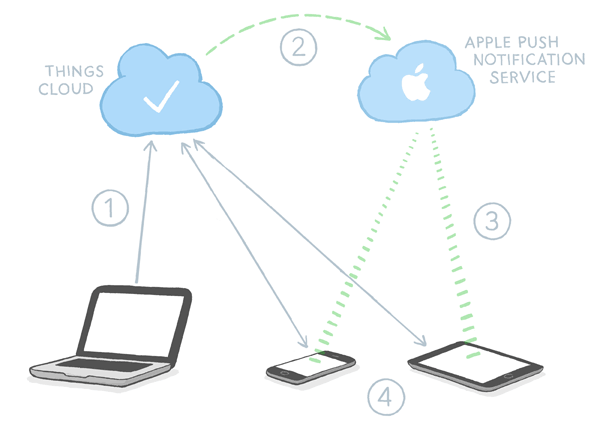 … which is quite nicely explained in full at their blog. Read the whole thing here.

And be on the lookout for Things 3. I’ll do my best to cover it here once it releases.