Why Another Task Management App?

If I could have the sync of Things, the layout and tagging and look of 2Do, the simplicity of Todoist, and the power and custom perspectives of OmniFocus, I’d have my perfect task management app. And I’D BE A PRODUCTIVITY MACHINE. Well, no, I’d still have to do all the tasks. (And life is more than doing stuff, anyway.)

But the answer to the question in the header above is that each task management app I’ve tried does not quite fit all my preferences. We adjust, of course, and it’s this phenomenon that has coders writing new task management apps as we speak. Maybe I’m just picky, though I’m far from the only one.

That’s all preface to why you are reading yet another task management app review on this blog. Here I consider 2Do.

Where 2Do (IMHO) Falls Short

Allow me to get the critiques out of the way first, because I really do like this app–a lot. And it has the most aesthetically pleasing interface out of any task management app I’ve used (OmniFocus, Things, Todoist…). But there are a few things that I would hope could be improved.

1. Sync is good (via Dropbox), but not quite instantaneous.

A recent release offered some significant improvement in sync speed, i.e., push sync. (2Do syncs via Dropbox, iCloud, Toodledo, or your CalDAV server.) Tasks and changes don’t sync instantaneously across devices (like Apple’s Reminders do), but this is more due to Apple’s limitations on third-party apps than any shortfall on 2Do’s part. Still, it’s a minor hassle when using the app. Things keeps leading the way here. More on 2Do’s sync methods is here.

TL;DR: Cross-device syncing with 2Do is about as good as it gets, but not perfect.

There are workarounds, but there is no easy and direct way to convert or forward emails to tasks from wherever you are. This, in my view, is a key necessity of a good task management app. Outlook, OmniFocus, Todoist, and Evernote all allow this, for example.

You can convert a Mac Mail message right to a 2Do task, however, described here, and that may be all some users need. There’s also a workaround using Toodledo that allows you to email tasks to 2Do, but non-users of Toodledo would have to create a new account and learn a new app to be able to do that. (It will be enough to learn 2Do.) For iOS email-to-task conversion, folks might consider the Dispatch app. But here’s to hoping 2Do adds support for email-to-task automation in a future release–one of the few things missing in this slick app.

That I have no additional major critiques than these is actually significant, since I’m a little picky when it comes to this kind of app. And now, on to the good stuff…

Ways in Which 2Do is Just Plain Awesome

You can attached a photo (whether from your Camera Roll or one you take from within the 2Do app) or voice memo to a task. For many, this is just how life works–we want to take a picture of a bill and convert it to a task to remind us to pay it. Or we think of an idea and want to speak it rather than type it. 2Do allows you to make these inputs into tasks.

2. 2Do has a nice Today widget and good Share extensions in iOS.

They look like this, and give you a way to access the app from just about anywhere on an iPhone or iPad:

3. It’s easy to set up actions and tasks, recurring and otherwise.

Quickly adding multiple tasks to get things off your mind is a cinch:

What about setting recurring tasks? Easy as pie.

You can even “Pick an Action” in a task.

Selecting “Message,” I then get this option:

Want to make a shopping list, you say? 2Do has a nifty List (checklist) feature you can use:

4. There is good calendar integration.

The app has even found a really elegant and easy way around the scroll wheel, for when you want to assign your task to both a due date and a due time:

So a task that’s all set up (no tags shown here) looks like this: 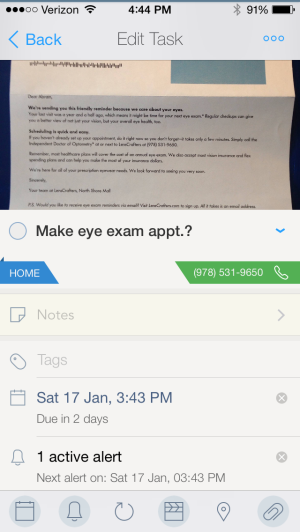 I’ve got a picture I took of an eye exam reminder, attached to the task, an action within the task to call (I just tap the green part and it dials), a reminder, a date and time… pretty smooth.

5. Did I mention how amazing it looks?

The iPhone and iPad apps look even better: 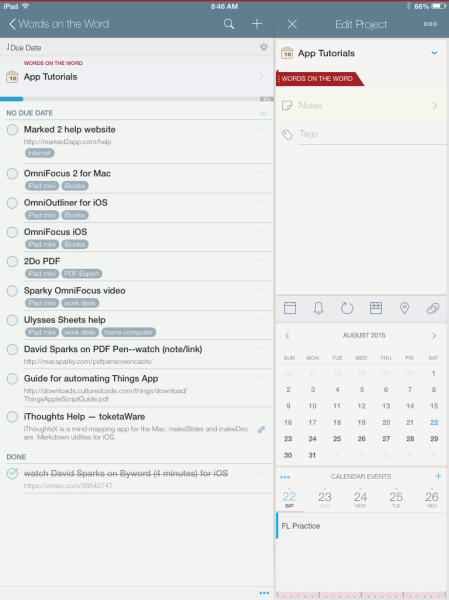 Note how 2Do shows you your tasks and your integrated calendar all together.

6. The iOS apps are some of the best-made apps in the App Store.

The makers of 2Do have really carefully thought this app through, including subtle touches like having a project’s color appear as a faint band on top of that project’s screen. You can easily swipe around from tasks to projects to tags to lists… navigation is very easy, and pretty.

You can even pinch zoom:

7. It’s got the power of OmniFocus, but with Tags.

You can see the Tags list in the images above. This allows you to customize your workflow to your heart’s content. You can also set up and save Smart Lists, i.e., searches you want to save to come back to. This is equivalent to OmniFocus’s custom perspectives. But something about actual tags makes it feel even more flexible.

There’s much more to say about this app, but I’m already at 1,000 words. If you want to learn more, you can find further documentation here.

If you’re starting from scratch with a task management app and have some money to spend, I can think of no good reason not to invest in 2Do, even over other options. It really is enjoyable to use. It’s powerful enough to help you track and execute multiple projects at once, yet simple enough to learn and start using right away.

You can find it in the App Store here (for Mac) and here (for iOS).

Thanks so much to the makers of 2Do for giving me a download in iOS and OSX for the review. Check out the app’s site here. I know this is a few days early for Apptastic Tuesday, but I couldn’t wait.