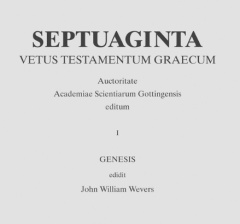 Accordance Bible has just released the Esther module in its Göttingen Septuagint. More volumes are on the way and scheduled for this month: Psalms with Odes, Jeremiah, the 12 Prophets, and Sirach. The Göttingen Septuagint is a text criticism workout. I’ve posted here and here about how to understand and use its apparatuses.

When I reviewed Göttingen in Logos earlier this year, I compared Isaiah modules between Logos and Accordance. At that time I wrote that the Logos text was more accurate to the print edition than the Accordance text, because it initially was. I was surprised, and saw this as a fluke for Accordance, whose texts–especially their original language ones–generally are the “research-grade” quality they seek to produce.

There’s been a recent update to Göttingen Isaiah in Accordance, so that it is now quite accurate in relation to the print edition. Accordance has also since dropped the price on its Isaiah module.

Where Accordance really excels in its presentation of Göttingen is the multiple ways it offers to search an apparatus. (See image at right.) The most helpful search field is “Manuscripts,” and one can also search by “Greek Content,” which greatly facilitates searching for a given text variant. Searching an apparatus in Logos doesn’t have nearly the options, and manipulating what search results one can get is more difficult.

One remaining fix in the Accordance apparatus (at least for the Isaiah module I’ve examined) is a symbol rendering issue. When the apparatus notes a case of homoioteleuton, what appears in print as 1°◠2° shows up in the apparatus as 1°  2°. (UPDATE: See Rick’s comment below; update is planned. UPDATE 12/14/13: This has now been corrected in Accordance.) This renders correctly in Logos.

Logos still doesn’t have the Kopfleiste (Source List) for the Göttingen volumes that have one in print, while Accordance does include it. On the one hand, the Kopfleiste makes most sense in a print edition, but one can imagine that serious students of the Septuagint may still want to be able to access it. Accordance’s Esther includes it, for example.

All the Göttingen volumes that have been published in print are in Logos already, but Accordance seems to be making fast progress of late in completing their own offering. Göttingen is more affordable in Logos (especially if you have their academic discount), but there are more advanced search options available in Accordance (both in the text and the apparatuses) that may make the user want to consider the latter software instead. If one wants just a single volume in Göttingen, that option is currently only available in Accordance.

Speaking of the Septuagint, I’ve just finished Greek Isaiah in a Year with a group of folks, and so will take recommendations for what to read next!

13 thoughts on “The Göttingen Septuagint in Accordance”